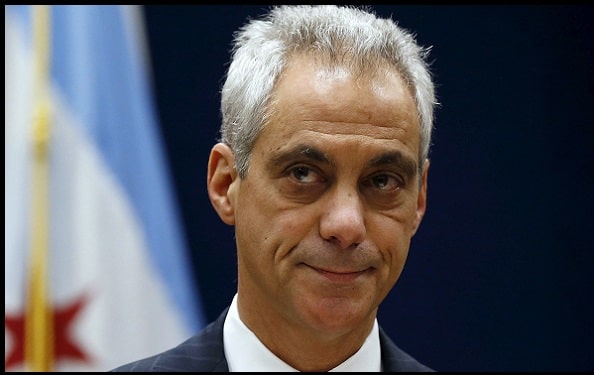 “Everybody knows they’re on the Obama team: There isn’t vice presidential vs. presidential division, there’s not a generational pull. People have internalized that this is a real moment in history.”-Rahm Emanuel 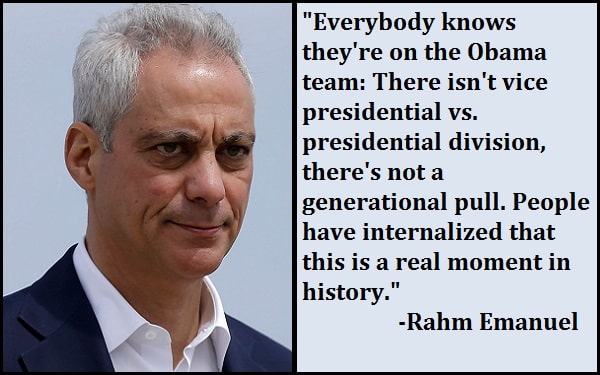 “I sometimes joke, Paula, even paranoid people have enemies.”-Rahm Emanuel

“Things happened there that I don’t think are the finest hours for anybody, whether it was a journalist, the legal system or, in that case of the political system, who would say that was an example of when Washington worked best.”-Rahm Emanuel

“You never let a serious crisis go to waste. And what I mean by that it’s an opportunity to do things you think you could not do before.”-Rahm Emanuel

“I don’t want to go negative on Franklin Delano Roosevelt, but he didn’t pass an economic deal in the first 100 days. We have passed the largest Recovery Act in the history of the country.”-Rahm Emanuel

“A strong economy depends on a strong middle class, but George Bush has put the middle class in a hole, and John McCain has a plan to keep digging that hole with George Bush’s shovel.”-Rahm Emanuel

“There’s no safe Republican district. You can run, but you cannot hide.”-Rahm Emanuel

“I would like to run for the mayor of the city of Chicago. That has always been an aspiration of mine even when I was in the House of Representatives.”-Rahm Emanuel

“When President Obama entered the White House, the economy was in a free-fall. The auto industry: on its back. The banks: frozen up. More than three million Americans had already lost their jobs. And America’s bravest, our men and women in uniform, were fighting what would soon be the longest wars in our history.”-Rahm Emanuel

“There was no blueprint or how-to manual for fixing a global financial meltdown, an auto crisis, two wars, and a great recession, all at the same time.”-Rahm Emanuel

“Today, because of President Obama’s courage, kids can stay on their parent’s plan until they are 26. Insurers cannot kick you off your policy because you have hit your limit. They will not be able to deny you because you have a pre-existing condition.”-Rahm Emanuel

“President Obama made the right choice, over one million Americans are still working today. The American auto industry is not just surviving. It is thriving. Where Mitt Romney was willing to turn his back on Akron, Dayton, and Toledo, Ohio, the president said, ‘I’ve got your back.'”-Rahm Emanuel

“Whose leadership, whose judgment, whose values do you want in the White House when that crisis lands like a thud on the Oval Office desk?”-Rahm Emanuel

“I consider myself a progressive. I have a passion for people who work. To me, this is about forward-looking versus backward-looking. Ideological gradations are the wrong way to look at it.”-Rahm Emanuel

“I can’t imagine being mayor and not having had the experience working for President Clinton or President Obama, or, for that matter, working in Congress. On the other hand, I think I would have been a better adviser had I been mayor first. If I had had this job first, I could have seen the implications of the things I was doing.”-Rahm Emanuel

“The GOP is broken. They need a Bill Clinton moment with someone to figure things out. Let me just say – and I don’t agree with his policies, so let me put a warning label on the side of the packet here – If George W. Bush had never gotten in the disastrous Iraq war, he was trying to modernize the party on a series of fronts.”-Rahm Emanuel

“Israel has a security concern involving geography. But geography does not have the same value it did in 1967.”-Rahm Emanuel

“To deal with what you have to deal with as mayor or president, there has to be an overriding psychological or professional or emotional gratification that would let you go through all the angst.”-Rahm Emanuel

“The world for our law enforcement community has changed dramatically: everything from filling out paperwork to relationships with the community and how they think the narrative is in the media.”-Rahm Emanuel

“Laquan McDonald is a wake-up call to all of us. It’s a reminder there’s a lot broken.”-Rahm Emanuel

“Representative Willis has introduced a bill, modeled after a Chicago law, to hold gun stores accountable for flooding our streets with weapons. Thousands of guns recovered by the Chicago Police Department can be traced back to just a handful of stores.”-Rahm Emanuel

“When I talk to Chicagoans who live in our most violence-prone neighborhoods, they do not hate the police. In fact, they tell me they want more cops and fewer gangs. They do not want more officers in cars just driving through their communities. They want officers on the beat in their neighborhoods.”-Rahm Emanuel

“The overwhelming number of police officers in Chicago are doing good work under difficult conditions. They put their lives on the line every day in situations none of us can fully comprehend or appreciate.”-Rahm Emanuel

“Fighting crime requires a partnership between the police and the community. And we all know that this partnership has been tested in Chicago. It is a problem that has festered in this city for decades.”-Rahm Emanuel

“As big a problem as gun violence is for Chicago, it is not beyond our ability to solve. Ending this string of tragedies is our top priority as a city. We are infusing our police department with the manpower, technology, and training to meet this challenge head-on.”-Rahm Emanuel

“Chicago is where the whole idea of community policing began. It remains the – the best and the most comprehensive approach we have in changing the everyday conditions that breed crime and violence – and then breed mistrust. We have more work to do. We need better training to live up to the values and the principles of community policing.”-Rahm Emanuel

“When parents tell their children not to congregate on corners, especially in groups, out of fear for them encountering the police, what does that say? We have a trust problem.”-Rahm Emanuel

“My attitude is governed as if you’ve run your last race. That’s not to say I’ve run my last race, but govern with liberation and freedom; change your mind frame to operate that way.”-Rahm Emanuel
script async src=”https://pagead2.googlesyndication.com/pagead/js/adsbygoogle.js”>