Sarojini Naidu Quotes:- Sarojini Naidu (13 February 1879 – 2 March 1949) was an Indian political activist and poet. A proponent of civil rights, women’s emancipation, and anti-imperialistic ideas, she was an important figure in India’s struggle for independence from colonial rule. Naidu’s work as a poet earned her the sobriquet Nightingale of India.

Sarojini Naidu organized flood-relief in Hyderabad (1908) and lecturer and campaigned on feminism, especially the abolition of purdah, the practice of secluding women from public observation.

“A country’s greatness lies in its undying ideals of love and sacrifice that inspire the mothers of the race.”-Sarojini Naidu 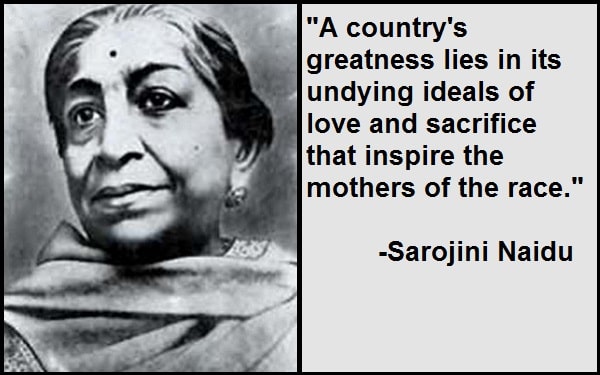 “We want deeper sincerity of motive, a greater courage in speech, and earnestness in action.”-Sarojini Naidu

“When there is oppression, the only self-respecting thing is to rise and say this shall cease today because my right is justice. If you are stronger, you have to help the weaker boy or girl both in play and in the work.”-Sarojini Naidu

One needs a Seer’s Vision and Angel’s voice to be of any avail. I do not know of any Indian man or woman today who has those gifts in their most complete measure.”-Sarojini Naidu

“My husband is exceedingly busy. For some time the talk of his going had been slack, but just now again there seems to be a move to get him sent to the front!”-Sarojini Naidu