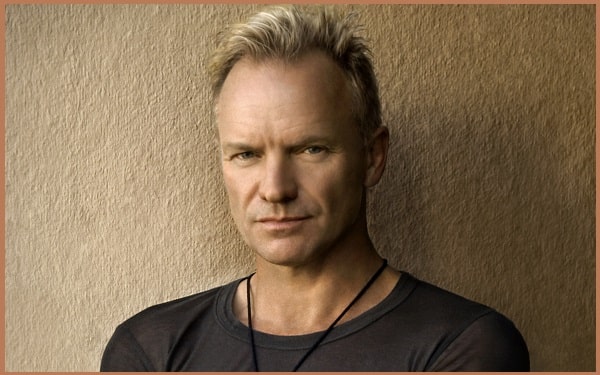 Sting Quotes:- Gordon Matthew Thomas Sumner (born 2 October 1951), known as Sting, is an English musician and actor. He was the principal songwriter, lead singer, and bassist for the new wave rock band the Police from 1977 to 1984, and launched a solo career in 1985. He has included elements of rock, jazz, reggae, classical, new-age.

“I don’t need to manufacture trauma in my life to be creative. I have a big enough reservoir of sadness or emotional trauma to last me.”-Sting 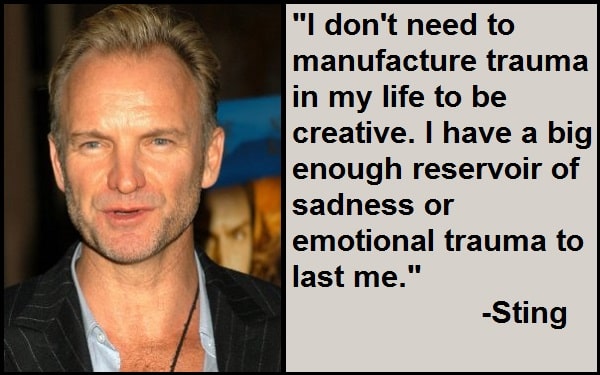 “One of the rewards of success is freedom, the ability to do whatever you like.”-Sting

“I’m not speaking as someone who has reached satori or anything else. I’m a student.”-Sting

“The deeper you get into Yoga you realize it is a spiritual practice. It’s a journey I’m making. I’m heading that way.”-Sting

“I think there’s room for both private exploration and group work in Yoga.”-Sting

“Love is stronger than justice.”-Sting

“The acceptance of death gives you more of a stake in life, in living life happily, as it should be lived. Living for the moment.”-Sting

“I want to get old gracefully. I want to have good posture, I want to be healthy and be an example to my children.”-Sting

“I’m very much afraid of being mad – that’s my one fear.”-Sting

“I realize that nothing’s as it seems.”-Sting

“When the world is running down, you make the best of what’s still around.”-Sting

“There’s no religion but sex and music.”-Sting

“I do my best work when I am in pain and turmoil.”-Sting

“I always stayed fit because I’m a performer, and all of those things help me to perform.”-Sting

“I think you can get the wrong impression about me from my work and think I’m always a bit down. I’m not that way at all. I’m fun-loving.”-Sting

“The more irrational of us are worried about the millennium ending – as if a date would really matter.”-Sting

“I’m not much of a family man. I’m just not that into it. I love kids, I adore them, but I don’t want to live my life for them.”-Sting

“It has very little to do with my work, but if your image is not sexy enough, people won’t listen. It’s part of the game.”-Sting

“My friends are Peter Gabriel, Bruce Springsteen, and we’re singing about mortality, getting older. It’s an interesting time.”-Sting

“I see songs, not as a commodity used up when the album goes off the charts, which is often the case with pop songs. I see them as a body of work. Life should be breathed into them.”-Sting

“An uncle of mine emigrated to Canada and couldn’t take his guitar with him. When I found it in the attic, I’d found a friend for life.”-Sting

“I can’t fly a flag for monogamy or whatever the opposite is; it depends on the person and on the situation.”-Sting

“I don’t understand American football at all. It looks like all-in wrestling with crash helmets.”-Sting

“I feel this music has nurtured me as I’ve been immersing myself in it. I’ve felt supported by it.”-Sting

“Success always necessitates a degree of ruthlessness. Given the choice of friendship or success, I’d probably choose success.”-Sting

“I have a big problem with piped music. I like either silence or to listen to it properly.”-Sting

“That sense of failure, I don’t know where people put it who don’t write songs and aren’t able to emote physically. It must go somewhere.”-Sting

“I learned to change my accent; in England, your accent identifies you very strongly with a class, and I did not want to be held back.”-Sting

“I miss England. I miss the weather. I’ve spent most of the last 25 years on tour. I’m ready to come home.”-Sting

“The Super Bowl is Americana at its most kitsch and fun.”-Sting

“I think love has something to do with allowing a person you claim to love to enter a larger arena than the one you create for them.”-Sting

“Peter Townshend shows us it’s all right to grow up. There is dignity after rock’n’roll.”-Sting

“I try to give the media as many confusing images as I can to retain my freedom. What’s real is for my children and the people I live with.”-Sting

“I was brought up as a Catholic and went to church every week and took the sacraments. It never really touched the core of my being.”-Sting

“I write the music, produce it and the band plays within the parameters that I set.”-Sting

“I’ve never lost perspective on who I am. Well, maybe briefly, but generally I’m pretty balanced.”-Sting

“I’ve spent a bit of time with the Prince of Wales, who I respect greatly. I’d give two cheers for the Monarchy.”-Sting

“If you make your living writing, and you can’t write anything, it’s over. It’s very frightening.”-Sting

“I hate most of what constitutes rock music, which is basically middle-aged crap.”-Sting

“The logical process will often be a safe one. I tend when I’m given that choice, to go the way that’s not safe.”-Sting

“I made two movies before The Police had a hit record: I did Quadrophenia and a film called Radio On.”-Sting

“Yoga introduced me to a style of meditation. The only meditation I would have done before would be in the writing of songs.”-Sting

“I have been through various fitness regimes. I used to run about five miles a day and I did aerobics for a while.”-Sting