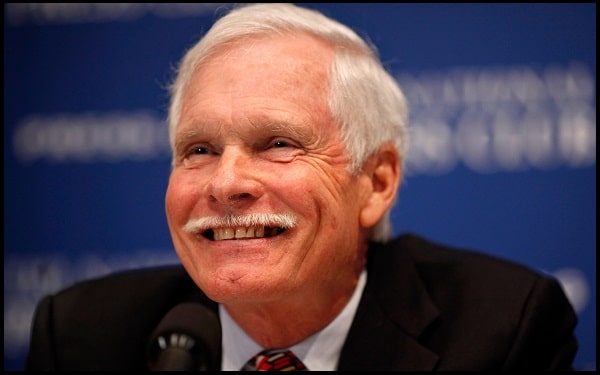 Ted Turner Quotes:- Ted Turner (born November 19, 1938) is an American media proprietor, producer, and philanthropist. As a businessman, he is known as the founder of the Cable News Network (CNN), the first 24-hour cable news channel. In addition, he founded WTBS, which pioneered the superstation concept in cable television, which later became TBS.

“We have to do more than keep media giants from growing larger; they’re already too big. We need a new set of rules that will break these huge companies into pieces.”-Ted Turner 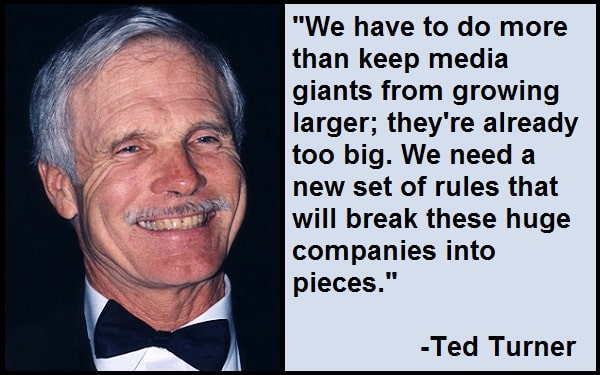 “I’ve never run into a guy who could win at the top level in anything today and didn’t have the right attitude, didn’t give it everything he had, at least while he was doing it; wasn’t prepared and didn’t have the whole program worked out.”-Ted Turner

“Sports is like a war without the killing.”-Ted Turner

“All my life people have said that I wasn’t going to make it.”-Ted Turner

“If I only had a little humility, I’d be perfect.”-Ted Turner

“The United States has got some of the dumbest people in the world. I want you to know that we know that.”-Ted Turner

“I didn’t get here for my acting… but I love show business.”-Ted Turner

“Over a three year period, I gave away half of what I had. To be honest, my hands shook as I signed it away. I knew I was taking myself out of the race to be the richest man in the world.”-Ted Turner

“To be happy in this world, first, you need a cell phone and then you need an airplane. Then you’re truly wireless.”-Ted Turner

“War has been good to me from a financial standpoint but I don’t want to make money that way. I don’t want blood money.”-Ted Turner

“Life is a game. Money is how we keep score.”-Ted Turner

“Rupert Murdoch is the most dangerous man in the world.”-Ted Turner

“You should set goals beyond your reach so you always have something to live for.”-Ted Turner

“I like Obama. I don’t know who could do a better job. He’s got an incredibly tough situation, and a good heart and mind. I’d like to see him rally to support a little better.”-Ted Turner

“I haven’t been to a store to buy anything for five years.”-Ted Turner

“I’ve had the good fortune to have a much more diverse life than most people would, professional sports and television and news and movies.”-Ted Turner

“I mean, there’s no point in sittin’ round and cryin’ about spilled milk. Gotta move on.”-Ted Turner

“I’d like to say that right now, in the last few years, the Democrats have been closer – have been more pro-environment. The coal industry is pretty well entrenched in the Republican Party and that’s one of the things that we need to phase out.”-Ted Turner

“Men should be disqualified from public office. Women should run the planet. They’re better than us.”-Ted Turner

“The biggest thing I learned from losing? Winning’s better.”-Ted Turner

“The U.N. had such lofty goals to eliminate poverty and stop war and cure diseases and help refugees – things that no one country could do.”-Ted Turner

“When I was a publisher of CNN, I took responsibility for the actions of the network.”-Ted Turner

“If you can get yourself where you’re not afraid of dying, then you can move forward a lot faster.”-Ted Turner

“I have both sleep apnea and atrial fibrillation, which are both debilitating conditions.”-Ted Turner

“I had more energy at 50. On the other hand, at 75, I’ve probably got a little more wisdom and good judgment than I had at 50 because I’ve got more experience. But I haven’t really changed. I’m still driven by the same philosophy.”-Ted Turner

“I think George Bush is the most dangerous man in the world.”-Ted Turner

“When our time’s up, it’s up. All the money in the world won’t buy you one more day.”-Ted Turner

“When I was young and ocean-racing competitively, and working the rest of the time, I was going 24 hours. I was on the verge of collapsing. But you’ve got to slow down a bit.”-Ted Turner

“The whole idea of television news or any kind of news is to inform people about things they need to know about.”-Ted Turner

“If the perpetrators of the World Trade Center plane crash had a nuclear weapon, there’s no doubt in my mind but that they would’ve detonated it in New York.”-Ted Turner

“I made a lot of money. I earned a lot of money with CNN and satellite and cable television. And you can’t really spend large sums of money, intelligently, on buying things. So I thought the best thing I could do was put some of that money back to work – making an investment in the future of humanity.”-Ted Turner

“If you had the most prestige and you were the network that everybody turned to in times of a crisis, that that was the most important position, in the news business, to hold.”-Ted Turner

“I think we’ve already voted at the U.N., in the Security Council, to get rid of nuclear weapons. Let’s get rid of them. Let’s get rid of ours and then Iran will stop, I believe. And so everybody else will, because if everybody doesn’t have them, then we’re safe, at least safe from a nuclear attack.”-Ted Turner

“It’s going to cost trillions of dollars to rework the energy sources all over the world. Were going to have to move away from fossil fuels.”-Ted Turner

“I believe in pulling together to make the country better right rather than pulling, tearing it apart for partisan reasons. I think the country comes first.”-Ted Turner

“Even if we didn’t have greenhouse gases, were going to have to move away from fossil fuels, as we’re going to run out. They’re finite, whereas solar and wind are infinite.”-Ted Turner

“At Time Warner, I had ten percent of the stock after the merger. But when we merged with AOL, I was diluted down to three percent.”-Ted Turner

“I lost 80 percent of my wealth and then gave away over half of the rest. So I’m a man of modest means now. But if you budget carefully and watch your expenditures, you can get by on a couple of billion dollars.”-Ted Turner

“The Iranians don’t intimidate! They’re like the Vietnamese and the Iraqis. Do you want to start a war with them? They’ll still be fighting in fifty years!”-Ted Turner

“It was a struggle financing CNN, but I did it without ever asking the government for a nickel.”-Ted Turner