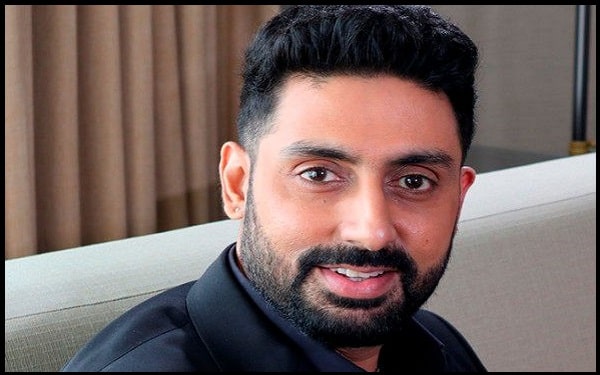 Abhishek Bachchan Quotes:- Abhishek Bachchan (born 5 February 1976) is an Indian film actor and film producer known for his work in Bollywood. Part of the Bachchan family, he is the son of actors Amitabh Bachchan and Jaya Bachchan.

Bachchan made his acting debut in 2000 with J. P. Dutta’s war film Refugee and followed it by starring in over a dozen films that were both critical and commercial failures. His first commercial successes came with the 2004 action films Dhoom and Run, which changed his career prospects.

“I like working on my birthday, so I always do.”-Abhishek Bachchan 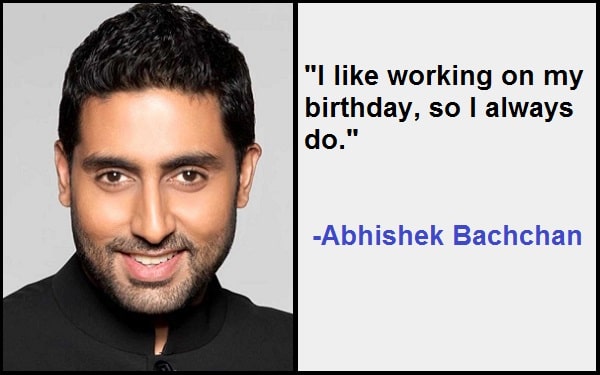 “I think every school in the world should have a sports program.”-Abhishek Bachchan

“A birthday is just another day where you go to work and people give you love. Age is just a state of mind, and you are as old as you think you are. You have to count your blessings and be happy.”-Abhishek Bachchan

“I am a sports enthusiast, and if given an opportunity, I want to be a sportsman, even today. I want to promote a sport that is indigenous to India. Kabaddi is a matter of national pride. Why can’t cricket, hockey, football and kabaddi be given equal platforms and co-exist? I believe that can happen.”-Abhishek Bachchan

“I don’t think your personal life has anything to do with your professional life. They are separate things. Whatever is happening at home shouldn’t be carried to work. Everyone has his/her own journey. Some revel in the fact that they derive that from personal contentment and others draw it from extreme sorrow.”-Abhishek Bachchan

“I still feel that in India we look upon sports as a recreational activity – which it is – but people have to understand that there is a career in sports. It’s not just necessary to be a doctor or a lawyer or an engineer, as most of us Indians appear to think that our children should grow up to be.”-Abhishek Bachchan

“The joy and happiness it gives you or the emotions you go through when you hold your child in your arms for the first time are indescribable! I really thought that there was going be this moment when a ray of light from heaven would come pouring in, the background music would start playing with angels singing, but none of that happens!”-Abhishek Bachchan

“The best gift for an actor is the love of the fans. Many make sweet cards, write letters and even come and meet me wherever I am in India. The love and blessings of your elders are also always cherished, but the extra mile that the fans go to is memorable.”-Abhishek Bachchan

“I’m not a model; hence I don’t see the reason to have six-pack abs. I can pull off a tough and rugged look of a cop in the ‘Dhoom’ series without taking my shirt off. Cops don’t have to move around without a shirt to flaunt their machismo. What makes the character of a cop stand out is his attitude and not his six-pack abs.”-Abhishek Bachchan

“There is one common thing in superstars – enthusiasm and humility towards their work. Offsets are big stars for others, and they carry themselves the way they want to. When they are working, they are not stars.”-Abhishek Bachchan

“Anybody who has interacted with me will definitely find me to be a chirpy person.”-Abhishek Bachchan

“Movie-making is a serious business. The director and the crew are already under a lot of pressure to give their best to the audience. Therefore, the best part for me as an actor is to act well in the movies and make a jolly atmosphere with the co-stars on the sets.”-Abhishek Bachchan

“Just because I don’t show six-pack abs doesn’t mean that I don’t have them.”-Abhishek Bachchan

“The only fear I have is that I will wake up one day and nobody will allow me to do films. This is a fear every actor has.”-Abhishek Bachchan

“I am not one of those people who will ever be comfortable mocking or making caricatures of the stereotypes attached to any community.”-Abhishek Bachchan

“There are no free lunches in life. You have to earn it. I am paying my dues. People have accused me of having it easy because I am Amitabh Bachchan’s son. Yes, I am his son, and I’ve never run away from it. I work hard to make him proud.”-Abhishek Bachchan

“I’ve always basically done everything that’s been offered to me. I’m one of the few actors who enjoy working a lot.”-Abhishek Bachchan

“Indian weddings are elaborate. As a culture, we like to celebrate everything… Our weddings go on for sometimes a week, 10 days.”-Abhishek Bachchan

“The trade magazine and all was banned in my house. The first time I read a film magazine was when I was 18.”-Abhishek Bachchan

“If people are looking forward to my films, then I am happy, and I must be doing something right.”-Abhishek Bachchan

“You have to understand that you are not making the film for yourself; you’re making it for the audience. If I am asking my audiences to buy tickets, I owe them the worth of their money, and I owe them entertainment.”-Abhishek Bachchan

“I don’t believe in asking God for anything. If I am worthy, He will give it to me. I think we should earn his blessings; I have never believed in manats.”-Abhishek Bachchan

“Critics have a job to do. They do not criticize you without reason.”-Abhishek Bachchan

“Honestly speaking, I don’t like my films. When I watch them, I see a lot of scope for improvement, so if I were to see any of my films, like ‘Dhoom,’ I might say… ‘It would have been better if…’ or ‘had it been…’ and this is all about evolving.”-Abhishek Bachchan

“My films are of paramount importance to me, the same as my family. That’s not going to change. This is a balance I have to strike throughout my life.”-Abhishek Bachchan

“I think India is very passionate about films. It’s almost a second religion back home. Due to that, I think film stars are – are really held in great esteem. Not that we’re complaining, but I think with that comes a lot of responsibility.”-Abhishek Bachchan