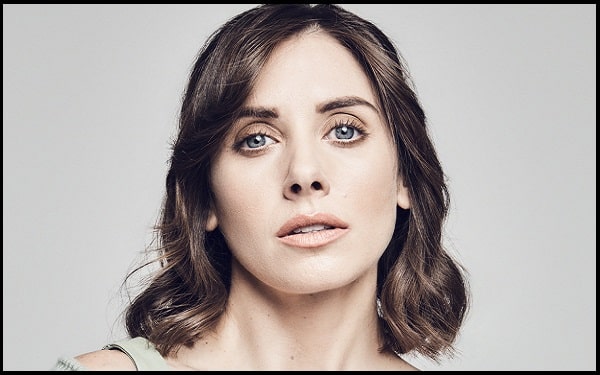 She also voices Diane Nguyen on the animated comedy series BoJack Horseman and plays Ruth Wilder in the comedy series GLOW (2017–present), for which she received nominations for the Golden Globe Award for Best Actress – Television Series Musical or Comedy and the Screen Actors Guild Award for Outstanding Performance by a Female Actor in a Comedy Series.

“I think it’s never too late to learn – or it’s a lesson that’s good to continue learning – that you need to treat everyone on a set with respect.”-Alison Brie 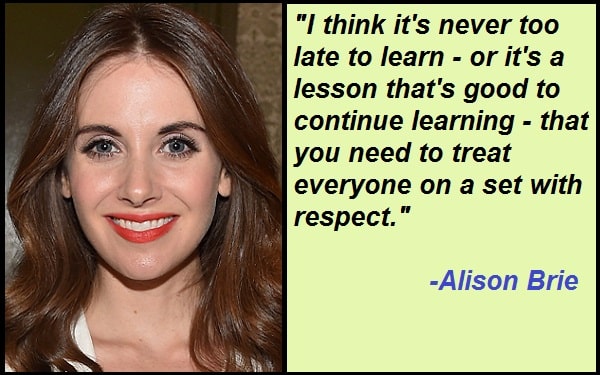 “I’m really not a TV junkie… OK, I kind of am a TV junkie, but I’m much more of a movie junkie – my junk food is romantic comedies I’ve seen a million times.”-Alison Brie

“You wanna do a lot of backstory for your character – as an actor, you wanna research that. But on the show, it’s fun to remain in that naive place as you go along and be able to continue to discover things about your character as the writers come up with them.”-Alison Brie

“You know, ‘Mad Men’ is notoriously secretive with its plotlines, even with exposing them to actors on the show.”-Alison Brie

“I look really good in a scuba suit.”-Alison Brie

“I was always a bit of a jokester.”-Alison Brie

“Twitter is the first information that I ingest in the morning. When there are important things happening, friends of mine who follow news feeds will report on it, so I find out about most major news on Twitter.”-Alison Brie

“I like to have my breakfast in bed, and I use that time to watch the recorded shows on my TiVo. I seldom watch shows in real-time – I’m always at work.”-Alison Brie

“What is it about women that they just go right for the guy that totally repulses them?”-Alison Brie

“In my personal life, I’m hilarious! I was always a bit of a jokester.”-Alison Brie

“I’ve always loved the film and wanted to work in film. I just love working and creating new characters, and trying different genres and different things. For me, I just love to work and I love movies.”-Alison Brie

“I think that a big part of comedy is being made fun of, and it is looking silly or looking stupid.”-Alison Brie

“Your opinion is not influenced by anyone when you’re alone at a matinee. It’s just you and the movie.”-Alison Brie

“I don’t know much about writing a show or being a show-runner on a show, but I can only imagine that when you first cast a show and you first do a pilot, there are so many components that you’re throwing into the mix and you’re not sure how they’re going to develop.”-Alison Brie

“If you’re a guy, you should get girls flowers all the time. They never get old and you can never get them enough. I’m never disappointed when I get flowers. I always thought guys who don’t buy women flowers are such fools. All it takes is one. A little goes a long way with flowers.”-Alison Brie

“I feel like any time John Oliver is added to something, the comedy is instantly there. He’s so funny.”-Alison Brie

“I try to be very much in control when it comes to working. I have a strong work ethic.”-Alison Brie

“My first TV job was on an episode of ‘Hannah Montana’… Since then, I’ve been fortunate to end up on shows that are just such a high quality, where the writing and material are incredible.”-Alison Brie

“I always wanted to play a mental patient. I was fascinated with playing crazy people in college, and I don’t know if I ever quite perfected it.”-Alison Brie

“I like that ‘Mad Men’ is now an adjective I use to describe clothing when I’m shopping: ‘I like this top. It’s very ‘Mad Men.'”-Alison Brie

“Honestly, my favorite kind of dancing is just lettin’ loose. There’s something great about the carefree flinging of your body to great music. It can be so joyous.”-Alison Brie

“A lot of people come to Los Angeles and think that they’re going to be famous, just like that.”-Alison Brie