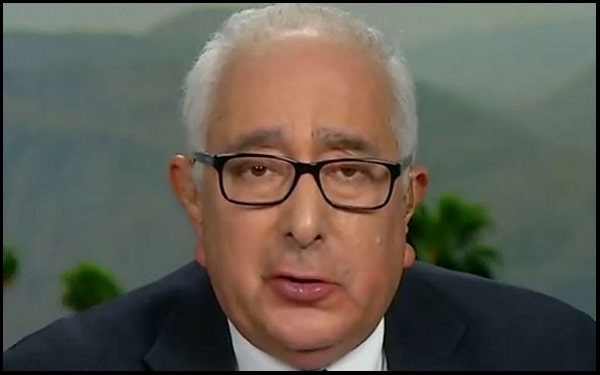 He began his career as a speechwriter for U.S. presidents Richard Nixon and Gerald Ford before entering the entertainment field as an actor, comedian, and game show host.

He is most well-known on-screen as the economics teacher in Ferris Bueller’s Day Off, the host of Win Ben Stein’s Money, and as Dr. Arthur Neuman in The Mask and Son of the Mask.

“Personal relationships are the fertile soil from which all advancement, all success, all achievement in real life grows.”-Ben Stein 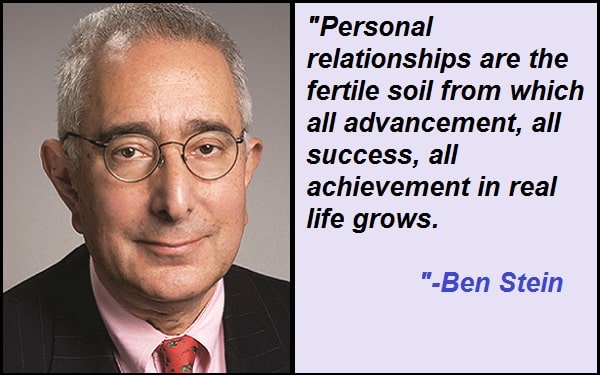 “Jump into the middle of things, get your hands dirty, fall flat on your face, and then reach for the stars.”-Ben Stein

“You must take the first step. The first steps will take some effort, maybe pain. But after that, everything that has to be done is real-life movement.”-Ben Stein

“The first step to getting the things you want out of life is this: Decide what you want.”-Ben Stein

“It isn’t the rich people’s fault that poor people are poor. Poor people who get an education and work hard in this country will stop being poor. That should be the goal for all poor people everywhere.”-Ben Stein

“Hollywood is largely about scammers and con men. It was my main livelihood for about 25 years, and the scams were beautiful and ugly, cheap and expensive, but, wow, were there a lot of scammers.”-Ben Stein

“I don’t believe the most successful people are the ones who got the best grades, got into the best schools, or made the most money.”-Ben Stein

“Every soul deserves a shot at a Cadillac, but not everyone should be guaranteed a Cadillac.”-Ben Stein

“My parents, products of the Great Depression, were successful people but lived in a state of constant fear that my sister and I, and they, would sink into the kind of economic insecurity that their generation knew so well.”-Ben Stein

“Somewhere there is a map of how it can be done.”-Ben Stein

“Traders can cause short-term volatility. In the long run, the market must revert to a sensible price/earnings multiple.”-Ben Stein

“If Iran and North Korea, by some horrible, devilish, nightmarish scenario, got together and went to war at the same time, one against Saudi Arabia and one against South Korea, I don’t know what we would do about that. I don’t know that we could stop them short of using nuclear weapons.”-Ben Stein

“A corporation’s responsibility is to the shareholders, not its retirees and employees. Companies are doing everything they can to get rid of pension plans and they will succeed.”-Ben Stein

“The indispensable first step to getting the things you want out of life is this: decide what you want.”-Ben Stein

“The America that we knew as the smartest place on the planet is gone with the wind.”-Ben Stein

“I am so in love with just lying in bed listening to Mozart.”-Ben Stein

“It is so great to sleep in a safe, glorious, beautiful America. I just cannot get over it.”-Ben Stein

“Science should always be in the business of attempting to disprove itself.”-Ben Stein

“I don’t like the sound of all the lists he’s making.”-Ben Stein

“It’s amazing what ordinary people can do if they set out without preconceived notions.”-Ben Stein

“Keep on beginning and failing. Each time you fail, start all over again, and you will grow stronger until you have accomplished a purpose – not the one you began with perhaps, but one you’ll be glad to remember.”-Ben Stein

“The human spirit needs to accomplish, to achieve, to triumph to be happy.”-Ben Stein

“If you can’t stand the heat, don’t go to Cancun in the summer.”-Ben Stein

“You cannot win if you’re not at the table. You have to be where the action is.”-Ben Stein

“The successful people of this world take life as it comes. They just go out and deal with the world as it is.”-Ben Stein

“Sleep makes people calmer, more alert, less fearful – just plain happier, or so I see around me and in me. I am sure that if this great nation were to concentrate on getting more sleep, we would be a happier, more confident people, and that by itself would be a major achievement.”-Ben Stein

“When I seemed to be irritable or sad, my father would quote the learned Dr. Knight, and then say, ‘Just go to sleep.’ Like all smart aleck kids, I thought the advice was silly. But as I’ve grown older, I’ve realized just how smart Knight was.”-Ben Stein

“If we try to engineer outcomes, if we overturn tradition to make everyone the same, we ruin society. If we upset tradition to allow for an equal shot at the starting gate, everyone wins, except for the charlatans and would-be dictators.”-Ben Stein

“Now, although my life is still pleasant, the days of easy money are over.”-Ben Stein

“Yes, Americans can still get credit for cars and trucks and refrigerators, and those businesses are doing well. But just try to get a home loan now.”-Ben Stein

“The banks are not lending, at least from what I see. They were so wild and reckless back in the good times that they got burned terribly.”-Ben Stein

“We in the media are just people with all of the people’s faults.”-Ben Stein

“So, who in the media is without sin among us? I am in the media and I am a major league sinner. I don’t know anyone except my wife who isn’t a big-time sinner.”-Ben Stein

“Greed is a basic part of animal nature. Being against it is like being against breathing or eating. It means nothing.”-Ben Stein

“It means zero to be against greed.”-Ben Stein

“I agree that there are some bad apples on Wall Street. I spent about ten years exposing corporate and financial fraud for ‘Barron’s’ magazine and I found a lot to write about.”-Ben Stein

“If you want to fight the evil you see in finance and industry, get to work reading the corporate filings, see if there has been fraud, and where you find it, report it to the SEC or write about it or blog about it.”-Ben Stein

“If there are finer beings than German short hairs, I don’t know what they are. In their eyes in peace.”-Ben Stein

“The ordinary American – as far as I can tell – knows so much less than he did fifty years ago and has such poor work habits compared with fifty years ago that the average multiplicand of knowledge/capabilities is a much smaller number than it was in 1961.”-Ben Stein

“After all the black man has been through in this world, he can still often reach levels of spirituality the most pampered white man cannot touch. Maybe what he’s been through is the reason why.”-Ben Stein

“Men and women succeed because they find a field of endeavor that matches their interests and abilities.”-Ben Stein

“The people who did the collateralized mortgage obligations sold them to pension funds, then sold them short, then bought credit default swap insurance on them, are just amazing. They are a law unto themselves.”-Ben Stein

“When are American Jews going to realize that the Republican Party is far better for Israel than the Democrats?”-Ben Stein

“Wow, bad news. Mr. Obama now hates Israel because the Israelis want to build 1,600 apartments in their capital city, Jerusalem. Russia hates Israel, too. So do the Europeans. So does Ban Ki-moon, a Korean who is secretary-general of the UN.”-Ben Stein

“Usually, I am not a conspiracy theorist. I don’t believe in the Bilderbergers as a conspiracy or the Trilateralists. But I am certain that the Communists killed JFK. There is a super great book called ‘Legend’ by Edward Jay Epstein that makes it all clear.”-Ben Stein

“I thought that all of the sacrifices and blessings of the whole history of mankind have devolved upon me. Thank you, God.”-Ben Stein

“My ‘thing’ is that I just lie in my immense bed and look out the window at the skyline over Virginia and the sky and the airplanes coming into Reagan. I love doing that.”-Ben Stein

“I am so used to having a comfortable life. What will it be like when I am no longer able to just buy anything I want?”-Ben Stein

“If there is no God, then man sometimes thinks he is god, and sometimes tries to live like a god.”-Ben Stein

“If there is no God, why bother to tell the truth? Why not steal?”-Ben Stein

“I have to tell you I never in my life anticipated getting this old, this fast. It seems as if I were 25 just a few days ago.”-Ben Stein

“I am scared of running out of money.”-Ben Stein

“As to a media personality, well that just happened in large measure because people found me amusing, and I did lots and lots of T.V. news interview shows.”-Ben Stein

“The education system should teach us about money; it’s an incredibly big subject. I run into people all the time that don’t have the first clue of what they should do about money.”-Ben Stein

“I’d say the main way people get into terrible financial trouble is just to spend too much money relative to their income, and that is an endemic problem in the United States of America, and that’s the kind of thing that should be taught about in schools.”-Ben Stein

“I tell you why I don’t think I will ever vote for a Democrat, if I may say so. Because for me, the number one issue is right to life, and I don’t think the Democrats are very good on the right-to-life issue.”-Ben Stein

“I think it’s criminal how little people in the military are paid. These are people out risking their lives, taken away from their families for long periods. I think they should be paid dramatically more than they’re paid.”-Ben Stein

“I have always been very concerned that Darwinism gave the basic okay to terrible racism and the idea of murder based upon race.”-Ben Stein

“The sad fact is that spending rises every year, no matter what people want or say they want.”-Ben Stein

“Trying to pick individual stocks is a trap. I can’t do it. Warren Buffett can, but hardly anyone else can beat the indexes over a long period.”-Ben Stein

“We’re a lazy, undisciplined generation. I don’t exempt myself: I spend way too much, even though I make a good income.”-Ben Stein

“If there’s a recession, I’d buy stocks. That’s when you make money: when markets are spooked.”-Ben Stein

“I always assumed scientists were free to ask any question, pursue any line of inquiry without fear of reprisal.”-Ben Stein

“People getting rich in a free society in general – with some scammy exceptions, which are rare – makes everyone else richer, too.”-Ben Stein

“When Hollywood sees a good story about a man who sells confidence, they see themselves and they like it.”-Ben Stein

“I spend so much time in fear of going broke, and I never have been even remotely close to going broke.”-Ben Stein

“My pals, such as they are, in Hollywood, ask me why I love to travel to D.C. so much, why it’s a vacation destination for me. I say, ‘Because I sometimes have perfect days there.'”-Ben Stein