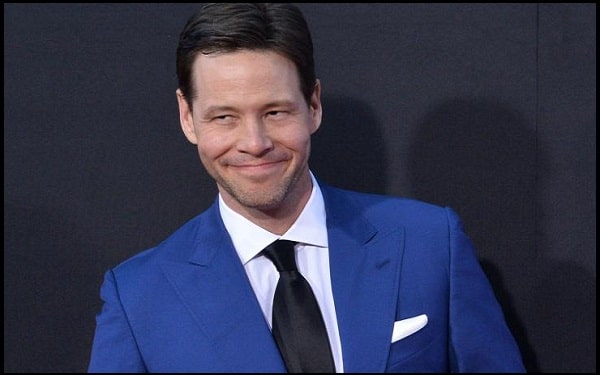 Ike Barinholtz Quotes:- Ike Barinholtz (born February 18, 1977) is an American comedian, actor, director, producer, and screenwriter. He is best known for his role as a cast member on the comedy series MADtv, Eastbound & Down, and The Mindy Project.

“I’m a big crier in general. The right life insurance commercial will take me out for a couple of days. I watched Hillary Clinton on the news the other day, and I got choked up by Hillary Clinton.”-Ike Barinholtz 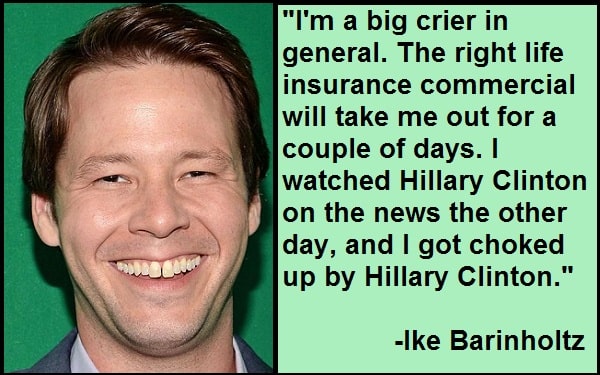 “We decided we don’t use the term ‘fat’ for me. We use the term ‘juicy’ for me. My wife’s fine with it, but the rule is when I’m over double her weight, it’s over.”-Ike Barinholtz

“I used to teach improv courses in Amsterdam where we would do team-building exercises, and they can go south very quickly.”-Ike Barinholtz

“I’ve been pretty lucky with neighbors. But back in 1998, I lived, like, literally next door to Wrigley Field in Chicago. And I had, like, 50,000 bad neighbors spread out over the course of one summer. I’m a diehard Cubs fan, but living right next to the ballpark, it’s just – as you’re trying to go to sleep, you can just, like, hear urination.”-Ike Barinholtz

“You don’t want to have to come into work on Monday already apologizing. I try to save my apologies for what I’ve done later in the week.”-Ike Barinholtz

“My first car was a 1999 red Mazda Protege.”-Ike Barinholtz

“I’m a huge fan of ‘Eastbound & Down.’ It’s one of my favorite shows.”-Ike Barinholtz

“Out of the 72 kids that I went to high school with, I still talk to 25 of them on a fairly regular basis. Seven of my classmates live in L.A., and five of them are in the entertainment business, and we constantly talk and play fantasy football together.”-Ike Barinholtz

“I went in and auditioned for one of the main guys for ‘The League’ when it was the first cast, and I was so excited because I was like, ‘Oh my God, this is my life!’ I love fantasy football, and I play with my buddies, and my wife is frustrated with it.”-Ike Barinholtz

“I’m more scared of parking by a parking meter than vampires because one of them is real and adversely affects my life and results in a $35 fine, and one is nonsense.”-Ike Barinholtz

“I take my dog to the vet a lot because he’s old and sick, and I always step on the scale when I’m there. Let’s just say shirts that were once button-able are no longer. I’m constantly being roasted by my wife.”-Ike Barinholtz

“I do this thing at every party: I go to a party, I stand around for, like, 45 minutes, and then I turn to my wife and say, ‘I think we should go home.’ And then we leave, and then I wake up the next morning and say to my wife, ‘We don’t go out anymore.’ It’s a great trick.”-Ike Barinholtz

“I love ‘Love Actually.’ ‘Love Actually,’ there are, like, nine stories in that movie. Three of them are good. But watching that movie, I get emotional, I get choked up, my wife makes fun of me. I don’t know if as you get older you get sappier and sentimental.”-Ike Barinholtz

“My very beloved and deceased third-grade teacher, Cliff Kehod, was the one that I really remember calling me Ike a lot. It just stuck. It is a dog’s name, but I love dogs.”-Ike Barinholtz

“I wanted to be a senator from Illinois. I was obsessed with politics. My dad was friends with a lot of local politicians, so I would hang out with them on Election Day and hand out buttons. Somehow, even though they were opposite, I loved Ronald Reagan and Bill Clinton. I thought they were the coolest guys!”-Ike Barinholtz

“It’s OK to argue with your friends. Guys can do it better than girls, usually, but if you ever get into a fight with a true friend or a spouse or a boyfriend, get it out, fight, be angry for five minutes, and then move past it. Don’t let it fester; don’t hold a grudge. If you do, that’s when it will get worse and worse.”-Ike Barinholtz

“My celeb crush is Julia Louis-Dreyfus. She’s hysterical, she’s beautiful, and she seems like a normal person. I’m in love with her.”-Ike Barinholtz

“If I was a condiment, I’m gonna go ahead and say I would be Sriracha because I go well with other things. I’m too much for some people, and hipsters like me.”-Ike Barinholtz

“Don’t be afraid to fail. You’re going to go on a million auditions, and most of them you won’t get. It’s very easy to think, ‘This is not going to work for me,’ but keep at it. It’s very generic advice, but you have to be willing to keep yourself in the game.”-Ike Barinholtz

“I do two cups of coffee with a little bit of raw sugar and soy creamer, and then I do a bowl of plain oatmeal with walnuts and blueberries. Now, if I could do what I really wanted to do with my life, every morning I would have a salami-and-cheese omelet with hash browns and a buttermilk biscuit – and pancakes. But my heart would explode.”-Ike Barinholtz

“I feel like we’ve already seen the burger truck, we’ve seen the lobster-roll truck. There are even healthy-food trucks now. But a big-thick-pizza truck? Come on, man. That’d be amazing.”-Ike Barinholtz

“I want to have a food truck that would just be bathrooms. I would line it up in the back of the other food trucks, and I’d charge $1 for use.”-Ike Barinholtz