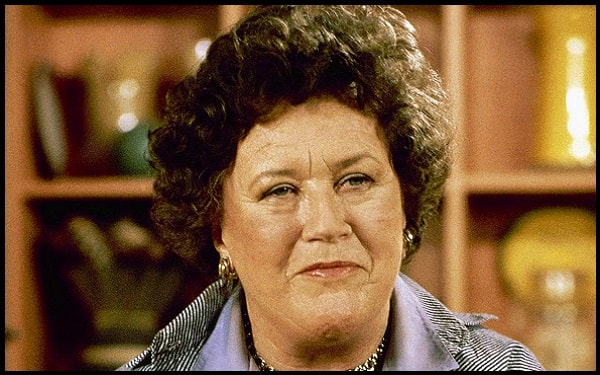 Julia Child Quotes:- Julia Child (August 15, 1912 – August 13, 2004) was an American cooking teacher, author, and television personality. She is recognized for bringing French cuisine to the American public with her debut cookbook, Mastering the Art of French Cooking, and her subsequent television programs, the most notable of which was The French Chef, which premiered in 1963.

“When you have a few cake formulas and filling ideas in your repertoire, you will find that it’s pretty much an assembly job – you can mix and match a different way every time.”-Julia Child 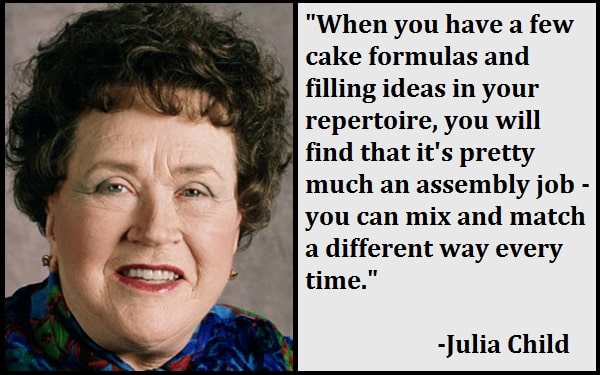 “In department stores, so much kitchen equipment is bought indiscriminately by people who just come in for men’s underwear.”-Julia Child

“I was 32 when I started cooking; up until then, I just ate.”-Julia Child

“It’s so beautifully arranged on the plate – you know someone’s fingers have been all over it.”-Julia Child

“In my generation, except for a few people who’d gone into banking or nursing or something like that, middle-class women didn’t have careers. You were to marry and have children and be a nice mother. You didn’t go out and do anything. I found that I got restless.”-Julia Child

“You learn to cook so that you don’t have to be a slave to recipes. You get what’s in season and you know what to do with it.”-Julia Child

“I think one of the terrible things today is that people have this deathly fear of food: fear of eggs, say, or fear of butter. Most doctors feel that you can have a little bit of everything.”-Julia Child

“Animals that we eat are raised for food in the most economical way possible, and the serious food producers do it in the most humane way possible. I think anyone who is a carnivore needs to understand that meat does not originally come in these neat little packages.”-Julia Child

“When I got to France I realized I didn’t know very much about food at all. I’d never had a real cake. I’d had those cakes from cake mixes or the ones that have a lot of baking powder in them. A really good French cake doesn’t have anything like that in it – it’s all egg power.”-Julia Child

“I found that the recipes in most – in all – the books I had were really not adequate. They didn’t tell you enough… I won’t do anything unless I’m told why I’m doing it. So I felt that we needed fuller explanations so that if you followed one of those recipes, it should turn out exactly right.”-Julia Child

“In the 1960s, you could eat anything you wanted, and of course, people were smoking cigarettes and all kinds of things, and there was no talk about fat and anything like that, and butter and cream were rife. Those were lovely days for gastronomy, I must say.”-Julia Child

“In the 1970s we got nouvelle cuisine, in which a lot of the old rules were kicked over. And then we had cuisine minceur, which people mixed up with nouvelle cuisine but was actually fancy diet cooking.”-Julia Child

“I had my first French meal and I never got over it. It was just marvelous. We had oysters and a lovely dry white wine. And then we had one of those lovely scalloped dishes and the lovely, creamery buttery sauce. Then we had a roast duck and I don’t know what else.”-Julia Child

“I was never a spy. I was with the OSS organization. We had a number of women, but we were all office help.”-Julia Child

“As we say in the American Institute of Wine and Food, small helpings, no seconds. A little bit of everything. No snacking. And have a good time.”-Julia Child

“I think careful cooking is love, don’t you? The loveliest thing you can cook for someone who’s close to you is about as nice a valentine as you can give.”-Julia Child

“Being tall is an advantage, especially in business. People will always remember you. And if you’re in a crowd, you’ll always have some clean air to breathe.”-Julia Child

“Drama is very important in life: You have to come on with a bang. You never want to go out with a whimper. Everything can have drama if it’s done right. Even a pancake.”-Julia Child

“I still feel that French cooking is the most important in the world, one of the few that has rules. If you follow the rules, you can do pretty well.”-Julia Child

“Because of media hype and woefully inadequate information, too many people nowadays are deathly afraid of their food, and what does fear of food do to the digestive system? I am sure that an unhappy or suspicious stomach, constricted and uneasy with worry, cannot digest properly.”-Julia Child

“What a marvelous resource soup is for the thrifty cook – it solves the ham-bone and lamb-bone problems, the everlasting Thanksgiving turkey, the extra vegetables.”-Julia Child

“The art of bread making can become a consuming hobby, and no matter how often and how many kinds of bread one has made, there always seems to be something new to learn.”-Julia Child

“Someone may offer you a freshly caught whole large fish, like a salmon or striped bass. Don’t panic – take it!”-Julia Child

“To be able to serve and to eat a whole fish, especially trout, is part of civilized dining. This applies particularly to the young, who should take to it as soon as they can handle knife and fork; this is a fine way for them to begin taking pride in themselves and their abilities.”-Julia Child

“As a girl, I had zero interest in the stove. I’ve always had a healthy appetite, especially for the wonderful meat and the fresh produce of California, but I was never encouraged to cook and just didn’t see the point in it.”-Julia Child

“I was lucky to marry Paul. He was a great inspiration, his enthusiasm about wine and food helped to shape my tastes, and his encouragement saw me through discouraging moments. I never would have had my career without Paul Child.”-Julia Child

“Usually, one’s cooking is better than one thinks it is.”-Julia Child

“The war broke out, and I wanted to do something to aid my country in a time of crisis. I was too tall for the WACs and WAVES, but eventually joined the OSS and set out into the world looking for adventure.”-Julia Child