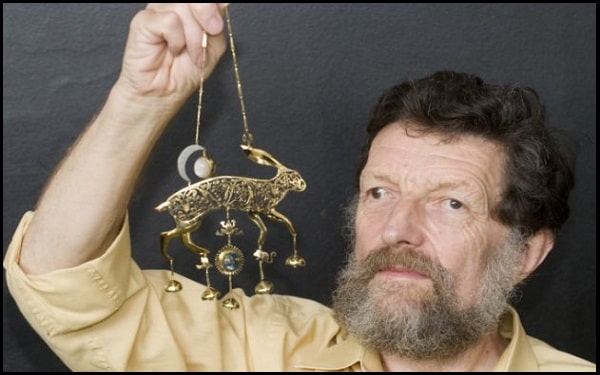 Kit Williams Quotes:- Kit Williams (born 28 April 1946) is an English artist, illustrator and author best known for his 1979 book Masquerade, a pictorial storybook which contains clues to the location of a golden (18 carat) jeweled hare created by Williams and then buried “somewhere in Britain”.

“If you look closely you can see that they are all interconnected, symbolic of a never-ending circle in which it is simply impossible for the dog to catch the rabbit.”-Kit Williams 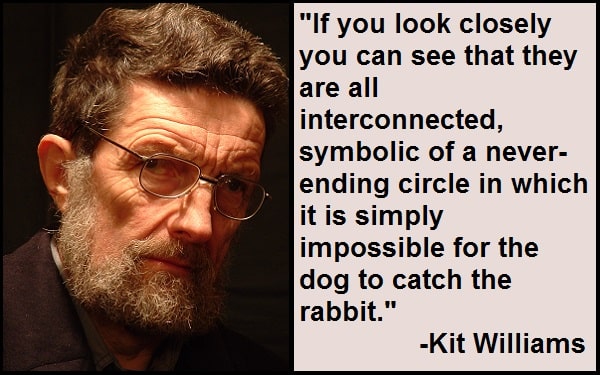 “She’s not happy about the life she is living but to jump through the hoop would mean to succumb to death.”-Kit Williams

“Newton, of course, was the inventor of differential calculus so his place in the tale is quite special.”-Kit Williams

“He was so tenacious he defied the distraction of women by refusing to have them in his presence, just as later in life he denied his blindness by calling for more and more candles.”-Kit Williams

“The rabbit is significant in that the handle on the original South Pointing Chariot was carved in the form of a rabbit. Because the handle extended out front it meant that wherever the rabbit went the chariot had to follow.”-Kit Williams

“The dog and the rabbit are telling us not to chase unattainable material goals.”-Kit Williams

“The hoop is there to remind us not to jump through it, not to submit to someone else’s control.”-Kit Williams

“If we listen to human instinct actually tells us what we need, but advertising makes us want things we don’t need and things we can’t have.”-Kit Williams

“The engine of ancient society was religion but the engine of contemporary society, as I see it, is advertising.”-Kit Williams

“Once upon a perfect night, unclouded and still, there came the face of a pale and beautiful lady. The tresses of her hair reached out to make the constellations, and the dewy vapors of her gown fell soft upon the land.”-Kit Williams

“The dog, the rabbit and the hoop all feature in the painting, and take the place of the orrery.”-Kit Williams

“Today she is the lady of death, which I believe is the best muse to have.”-Kit Williams

“I think most artists find it difficult to part with their work but it’s the parting that keeps us alive and keeps us working.”-Kit Williams

“I made every single piece myself, each individual component, so it was quite time-consuming.”-Kit Williams

“Having designed and built several clocks during my career it suddenly occurred to me that when you look at the face of a clock both hands have the same center.”-Kit Williams

“I started by looking at what others had done before me. You see, over the years there have been attempts by many different people to reconstruct the chariot.”-Kit Williams

“The original item looked like a little hand cart with the figure of a man mounted on a platform between the wheels. The man’s outstretched arm always pointed south.”-Kit Williams