Ballerina Quotes:- Ballet is a type of performance dance that originated during the Italian Renaissance in the fifteenth century and later developed into a concert dance form in France and Russia.

It has since become a widespread, highly technical form of dance with its own vocabulary based on French terminology.

Below you will find our collection of inspirational, wise, and humorous old ballerina quotes, ballerina sayings, and ballerina proverbs, collected over the years from a variety of sources.

“Stretching before and after every workout keeps muscles supple and helps elongate the lines of a ballerina’s limbs.”– Mary Helen Bowers 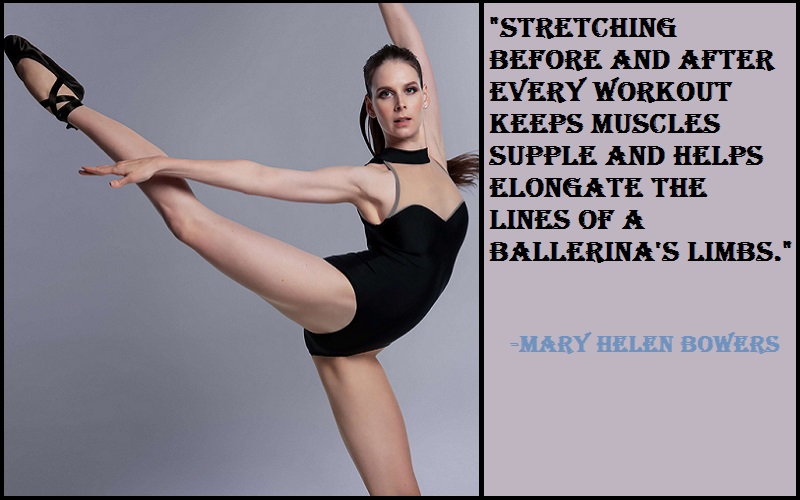 “You have to love dancing to stick to it. It gives you nothing back, no manuscripts to store away, no paintings to show on walls and maybe hang in museums, no poems to be printed and sold, nothing but that single fleeting moment when you feel alive.”-Merce Cunningham

“Every dance you make belongs to you. It is part of your collection. When you think of it like that, you’ll want to make your next routine the best you’ve ever made!”-Torreon-Lee Dewar

“It ballet is a perfect medium for the expression of spiritual love.”-Ayn Rand

“Dance to inspire, dance to freedom, life is about experiences so dance and let yourself become free.”-Shah Asad Rizvi

“Dancing is creating a sculpture that is visible only for a moment.”-Erol Ozan

“One step, two steps, three steps; like winds of time experience joy of centuries, when movements become revelations of the dance of destinies.”-Shah Asad Rizvi

“The ballet needs to tell its own story in such a way it can be received without having to be translated into language.”-Twyla Tharp

“All ballet galas are unbearable, but they’re unbearable in different ways.”-Robert Gottlieb

“The ballet is a purely female thing; it is a woman, a garden of beautiful flowers, and man is the gardener.”-George Balanchine

“Ballet is an incredibly difficult, beautiful art form that takes a lot of training, a lot of time, and a lot of hard work.”-Sutton Foster

“Ballet is like any other art form in that we all start out knowing nothing about it.”-Robert Gottlieb

“Dance design is not simply one element; it is that without which ballet cannot exist. As aria is to opera, words to poetry, color to paint, so sequence in steps their syntax, idiom, vocabulary are the stuff of stage dancing.”-Lincoln Kirstein

“In ballet, a complicated story is impossible to tell we can’t dance synonyms.”-George Balanchine

“Ballet is purifying, every movement physically honed and essential, with no superfluity or excess.”-Jennifer Homans

“Ballet is a universe of the imagination, a place of magic and enchantment, beauty and romance. Its many worlds vibrate with graceful dancers, glorious music, and sumptuous costumes.”-Trudy Garfunkel

“Ballet is the body rising. Ballet is ceremonial and hieratic. Its disdain for the commonplace material world is the source of its authority and glamour.”-Camille Paglia

“Ballet is created on beautiful lines and shapes. If what you hear and what you see the mesh, there’s a very thrilling experience.”-Martin Fridmann

“The physical language of the body is so much more powerful than words.”-Bill Irwin

“Dancing is the loftiest, the most moving, the most beautiful of the arts. For it is no mere translation or abstraction of life. It is life itself.”-Henry Havelock Ellis

“Ballet is not a technique but a way of expression that comes more closely to the inner language of man than any other.”-George Borodin

“Dancing is like bank robbery, it takes split-second timing.”-Twyla Tharp

“Ballet is the one form of theater where nobody speaks a foolish word all evening, nobody on the stage at least.”-Edwin Denby

“A ballerina takes steps given to her and makes them her own. Each individual brings something different to the same role,”-Maria Tallchief

“A real ballerina must fill her space with her own personality.”-Natalia Makarova

“The ballerina style is here to stay. An added advantage is that the shoes blend well with Indian as well as Western attire.”-Priya Sachdev

“If you were ever a ballerina, you know the pain: just to be able to look like it’s all so light, but when they take off their shoes, it’s all bloody.”-Michelle Yeoh

“I wanted to be a skinny little ballerina but I was a voluptuous little Italian girl whose dad had meatballs on the table every night.”-Lady Gaga

“In my next life, I’m going to be a rock star. I was a ballerina in my last life.”-Kate Moss

“I wanted to be a ballerina. I changed my mind.”-Beverly Cleary

“When I grow up I am going to be a ballerina. I will be in Giselle. It will be so much fun being a ballerina.”-Karen Kain

“If I could choose something besides fashion, I would love to be a ballerina.”-Carine Roitfeld

“I’ve been a ballerina since I was two, but I’ve always wanted to be an actress.”-Dakota Fanning