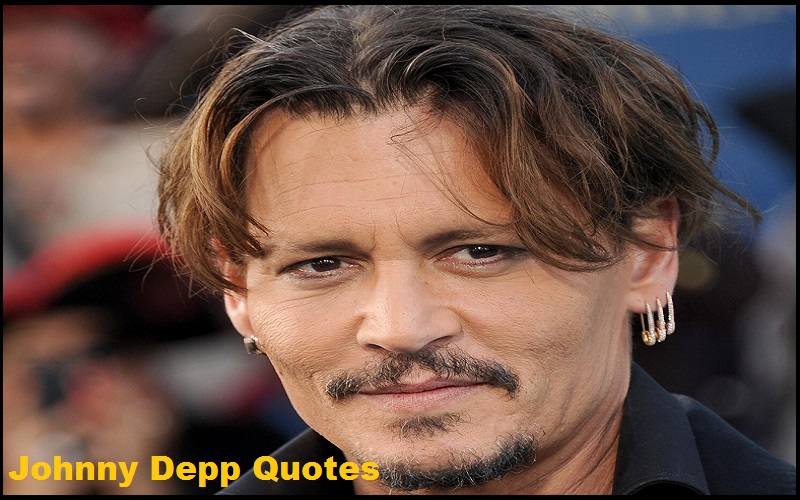 Johnny Depp Quotes:- Johnny Depp II (born June 9, 1963) is an American actor, producer, and musician. He has been nominated for 10 Golden Globe Awards, winning one for Best Actor for his performance of the title role in Sweeney Todd.

“People say I make strange choices, but they’re not strange for me. My sickness is that I’m fascinated by human behavior, by what’s underneath the surface, by the worlds inside people.”-Johnny Depp 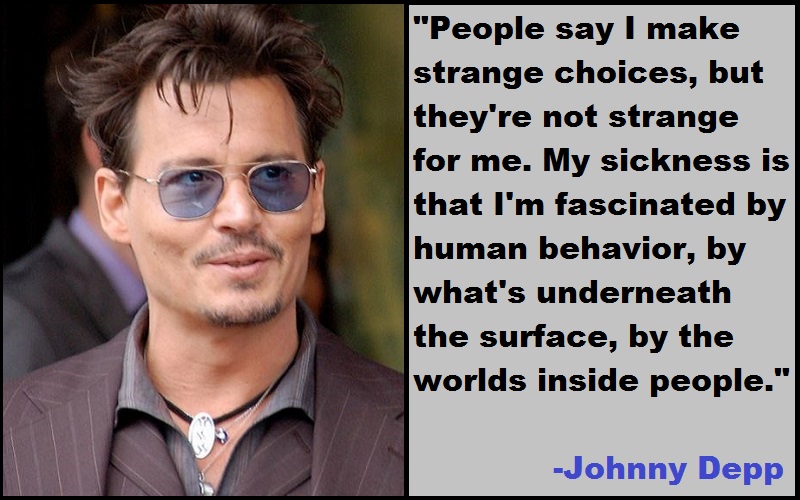 “I’m an old-fashioned guy… I want to be an old man with a beer belly sitting on a porch, looking at a lake or something.”-Johnny Depp

“I pretty much try to stay in a constant state of confusion just because of the expression it leaves on my face.”-Johnny Depp

“America is dumb. It’s like a dumb puppy that has big teeth that can bite and hurt you – aggressive. My daughter is four; my boy is one. I’d like them to see America as a toy – a broken toy. Investigate it a little, check it out, get this feeling, and then get out.”-Johnny Depp

“There’s definitely healing properties to being in proximity to the ocean and that breeze. There’s something about that Caribbean climate and humidity.”-Johnny Depp

“I’m shy, paranoid, whatever word you want to use. I hate fame. I’ve done everything I can to avoid it.”-Johnny Depp

“On a film, you start to get closer and closer with the people you’re working with, and it becomes like this circus act or this traveling family.”-Johnny Depp

“You start getting hit with some very interesting situations in life – you as a parent – when they approach that teenage area, which is frightening because you still have memories of that age and the things you were doing at that age… Please don’t do what I did.”-Johnny Depp

“Me, I’m dishonest, and you can always trust a dishonest man to be dishonest. Honestly, it’s the honest ones you have to watch out for.”-Johnny Depp

“Puberty was very vague. I literally locked myself in a room and played guitar.”-Johnny Depp

“I don’t pretend to be captain weird. I just do what I do.”-Johnny Depp

“Simplicity – that’s what I want. It’s been a rare commodity for me for a number of years, but I enjoy being able to hang out with my girl, read the newspaper, and sit back and start to read a book by someone I admire, like Lawrence Krauss or Christopher Hitchens. And that’s it – simplicity, where the game of Hollywood doesn’t exist.”-Johnny Depp

“There is nothing on earth that could ever make me want to relive certain years of my life when I was young.”-Johnny Depp

“The only gossip I’m interested in is things from the Weekly World News – ‘Woman’s bra bursts, 11 injured’. That kind of thing.”-Johnny Depp

“You grow up a bit damaged or broken then you have some success but you don’t know how to feel good about the work you’re doing or the life you’re leading.”-Johnny Depp

“I was ecstatic they re-named ‘French Fries’ as ‘Freedom Fries’. Grown men and women in positions of power in the U.S. government showing themselves as idiots.”-Johnny Depp

“I think it’s an actor’s responsibility to change every time. Not only for himself and the people he’s working with, but for the audience. If you just go out and deliver the same dish every time… it’s meatloaf again… you’d get bored. I’d get bored.”-Johnny Depp

10 Most Famous and Inspirational Quotes by Johnny Depp

“I still approach a scene as one would approach a solo. There’s nothing set or pat.”-Johnny Depp

“I have a place that I get to go to in the Bahamas. It’s the only place that guarantees total anonymity and freedom.”-Johnny Depp

Anything I’ve done up till May 27th, 1999 was kind of an illusion, existing without living. My daughter, the birth of my daughter, gave me life.”-Johnny Depp

“I like the challenge of trying different things and wondering whether it’s going to work or whether I’m going to fall flat on my face.”-Johnny Depp

“I always wanted to be a character actor rather than the poster boy that they tried to make me 100 years ago. An actor has a degree of responsibility to change for the audience, to give them something new each time, to surprise and not bore them.”-Johnny Depp

“I was angry and frustrated until I started my own family and my first child was born. Until then I didn’t really appreciate life the way I should have, but fortunately, I woke up.”-Johnny Depp

Top 10 Johnny Depp Quotes That Are So Touching

“I went through various stages in my childhood, as we all do, various stages of obsessions with people and things. And I did. I wanted to be the first white Harlem Globetrotter.”-Johnny Depp

“The beauty, the poetry of the fear in their eyes. I didn’t mind going to jail for, what, five, six hours? It was absolutely worth it.”-Johnny Depp

“I’m just an actor, and if I can leave something behind that my kids will be proud of, then that’s what I want. I don’t want my kids to be embarrassed by anything I’ve done.”-Johnny Depp

“There is nothing on earth that could ever make me want to relive certain years of my life when I was young.”-Johnny Depp

“I guess I’m attracted to these off beat roles because my life has been a bit abnormal. The only thing I have a problem with is being labeled.”-Johnny Depp

“It’s good to experience Hollywood in short bursts, I guess. Little snippets. I don’t think I can handle being here all the time, it’s pretty nutty.”-Johnny Depp

“My job, as an actor, is to give the director options. You can only hope that the takes that you thought were the best were chosen. But, then again, if I don’t watch it, I’ll never know.”-Johnny Depp

“Music is still part of my life, but I hate the idea of people coming to see me play the guitar because they’ve seen me in movies. You want people who are listening to be only interested in music.”-Johnny Depp