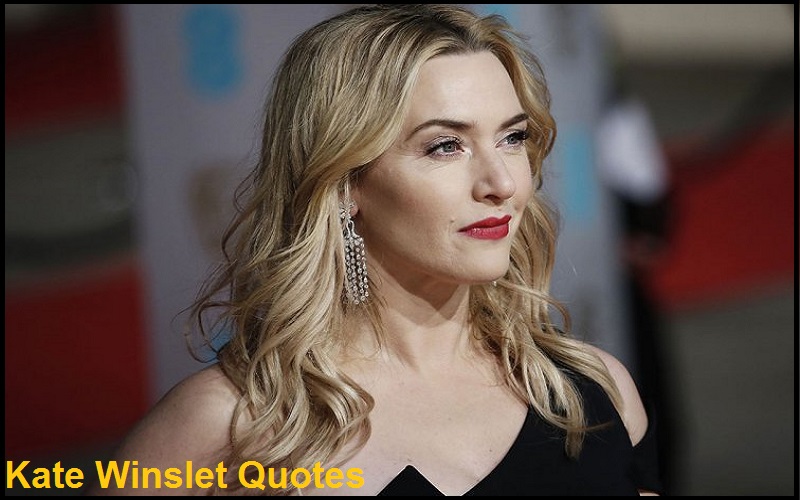 Share Tweet Pin it Email WhatsApp
Kate Winslet Quotes:- Kate Winslet (born 5 October 1975) is an English actress. She is particularly known for her work in period dramas and tragedies and is often drawn to portraying troubled women.
Winslet is the recipient of several accolades, including three British Academy Film Awards, and is among the few performers to have won Academy, Emmy, and Grammy Awards.

“Thank God I’m in touch with my emotions enough to be able to pick up my children, kiss them all over and say ‘I love you’ over and over.”-Kate Winslet 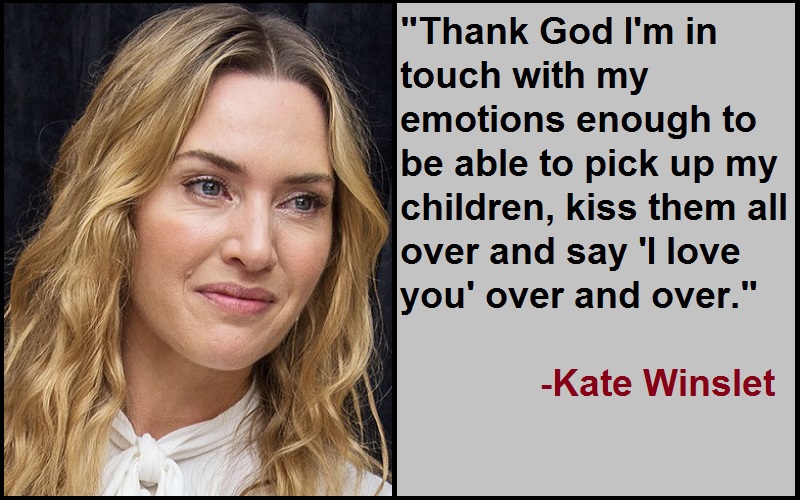 “The good and bad things are what form us as people… change makes us grow.”-Kate Winslet

“Glamour to me is about remaining graceful and understated.”-Kate Winslet

“The things that make me happiest in the whole world are going on the occasional picnic, either with my children or with my partner; big family gatherings; and being able to go to the grocery store – if I can get those things in, I’m doing good.”-Kate Winslet

“It’s very easy to be judgmental until you know someone’s truth.”-Kate Winslet

“Ah… romance to me is spontaneity. It’s not diamond earrings; it’s a bunch of daffodils that are freshly picked from the field.”-Kate Winslet

“Life is short, and it is here to be lived.”-Kate Winslet

“When I was doing ‘Eternal Sunshine of the Spotless Mind’ I was asked, ‘If there was one part of your life that you could erase, what would it be?’ And I was so stunned by that. I thought: ‘Nothing.’ I would keep all the good bits and the bad bits because those things made me who I am.”-Kate Winslet

“I’m not very technically minded. I mean, I don’t know how to do e-mail on computers.”-Kate Winslet

“I do like being busy. I’m not the kind of person who just sits around and goes to a spa when I’m not working.”-Kate Winslet

“Plastic surgery and breast implants are fine for people who want that if it makes them feel better about who they are. But, it makes these people, actors especially, fantasy figures for a fantasy world. Acting is about being real being honest.”-Kate Winslet

“I do like being busy. I’m not the kind of person who just sits around and goes to a spa when I’m not working.”-Kate Winslet

“The happiness I feel in having a family has brought me real beauty.”-Kate Winslet

“I have wrinkles which are very evident. I will particularly say when I look at movie posters, ‘You guys have airbrushed my forehead. Please, can you change it back?”-Kate Winslet

“One thing I love about being back is English rain. Looking out of the window now, it’s raining, and the sky is dark; I love it. To me, those are reassuringly English things. I love it when it rains.”-Kate Winslet

“There are moments to indulge and enjoy, but I always know when it’s time to go home and wash my knickers.”-Kate Winslet

“I wanted to play incredibly challenging, multifaceted characters. Because we are all a puzzle.”-Kate Winslet

“Experiencing those moments of being alone… is a very, very weird flooring and exposing position to be in when you’re just not used to it… But I’ve never been lonely. And with my kids Mia and Joe that remains the case.”-Kate Winslet

“I’ll eat one cookie, not a whole box of cookies. But I’ll still eat the one cookie… sometimes two, or even three. But not the whole box.”-Kate Winslet

“You have to forgive me because I have a habit of not winning things.”-Kate Winslet

“Experiencing those moments of being alone… is a very, very weird flooring and exposing position to be in when you’re just not used to it… But I’ve never been lonely. And with my kids Mia and Joe that remains the case.”-Kate Winslet

“My life has taken me down several different paths I never expected it to take me down. Not in a million years.”-Kate Winslet

“Playing Juliet in ‘Heavenly Creatures’ changed my life, and the role of Clementine in’ Eternal Sunshine of the Spotless Mind’ opened many new doors creatively.”-Kate Winslet

“Ah, my dad’s whistle. On holidays when I was a kid, we would all be off in the rock pools along the beach. When it came time to go, we’d hear the whistle and we’d all come running. Like dogs!”-Kate Winslet

“Single mums do come in for a hard time. Society is incredibly judgmental. I know this.”-Kate Winslet

“I kept my head; I mean, I’ve never been one of those people who ended up in the gutter with sick in my hair.”-Kate Winslet

“What I’ve learned about acting is that it needs to be mysterious. If you overthink how a beat needs to be played, it can trip you up.”-Kate Winslet

“Being told to cut off and walk away from a child – I cannot imagine it. I think I’d rather die.”-Kate Winslet

“Just because society, and government, and whatever was different 100 years ago, doesn’t mean that people didn’t have sex, pick their nose, or swear.”-Kate Winslet