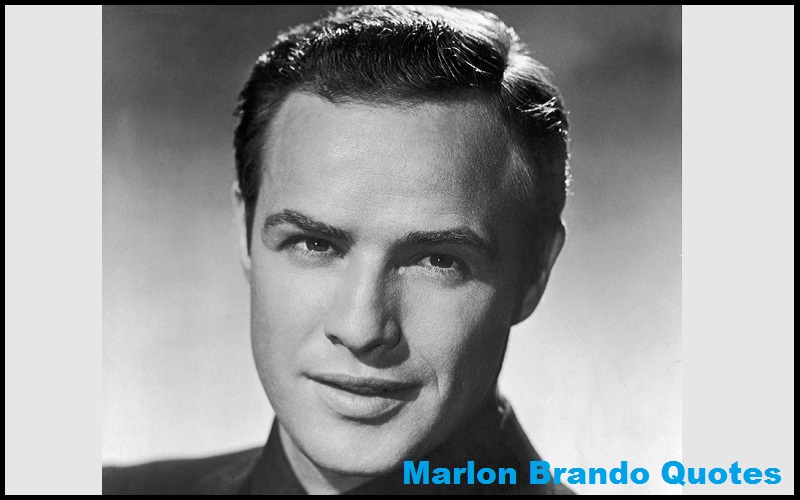 Share Tweet Pin it Email WhatsApp
Marlon Brando Quotes:- Marlon Brando Jr. (April 3, 1924 – July 1, 2004) was an American actor and film director. With a career spanning 60 years, he is well-regarded for his cultural influence on 20th-century film. Brando’s Academy Award-winning performances include that of Terry Malloy in On the Waterfront (1954) and Don Vito Corleone in The Godfather (1972).
Brando was an activist for many causes, notably the civil rights movement and various Native American movements.

“Most of my childhood memories of my father are of being ignored. I was his namesake, but nothing I did ever pleased or even interested him. He enjoyed telling me I couldn’t do anything right.”-Marlon Brando 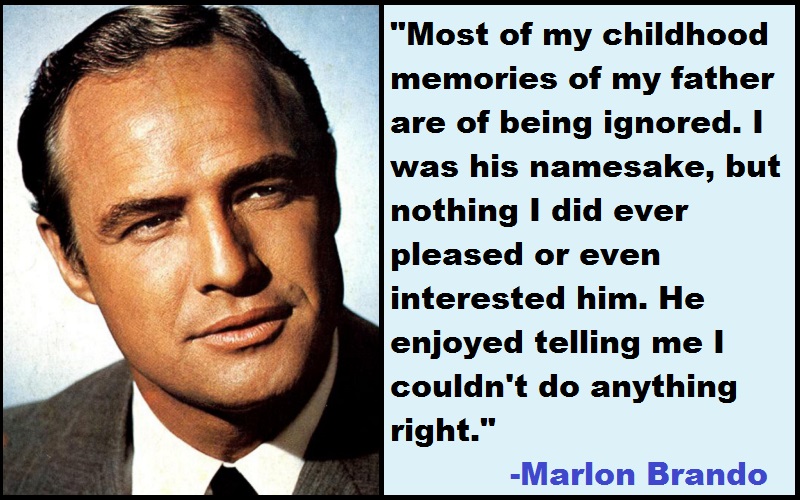 “Privacy is not something that I’m merely entitled to, it’s an absolute prerequisite.”-Marlon Brando

“If you want something from an audience, you give blood to their fantasies. It’s the ultimate hustle.”-Marlon Brando

“The only reason I’m in Hollywood is that I don’t have the moral courage to refuse the money.”-Marlon Brando

“There’s a line in the picture where he snarls, ‘Nobody tells me what to do.’ That’s exactly how I’ve felt all my life.”-Marlon Brando

“I have never been able to remember the number of my driver’s license, and there have been times when I couldn’t even remember my own telephone number, but when I hear a song, sometimes only once, I never forget the melody or the lyrics.”-Marlon Brando

“To grasp the full significance of life is the actor’s duty, to interpret it is his problem, and to express it his dedication.”-Marlon Brando

“The only thing an actor owes his public is not to bore them.”-Marlon Brando

“If we are not our brother’s keeper, at least let us not be his executioner.”-Marlon Brando

“With women, I’ve got a long bamboo pole with a leather loop on the end. I slip the loop around their necks so they can’t get away or come too close. Like catching snakes.”-Marlon Brando

“Our family always had animals, but they became more important to me as the years passed because they helped me deal with the absence of love.”-Marlon Brando

“The caste system may be more highly developed in countries like India or England, but every tier of society in almost every culture tries to dominate a group it perceives as beneath it.”-Marlon Brando

“Acting is the expression of a neurotic impulse. It’s a bum’s life. Quitting acting, that’s the sign of maturity.”-Marlon Brando

“At Libertyville High, I was a bad student, chronic truant, and all-round incorrigible. I was forever being sent to the principal’s office to be disciplined.”-Marlon Brando

“I don’t mind that I’m fat. You still get the same money.”-Marlon Brando

“We’d all like to be certain of what we know, but I think the most important question is to ask yourself do you really know what you know?”-Marlon Brando

“If there’s anything unsettling to the stomach, it’s watching actors on television talk about their personal lives.”-Marlon Brando

“At fourteen or fifteen, I decided to earn my living when I grew up playing drums made from wooden beer kegs and leading a group called Keg Brando and His Kegliners. We organized a little band, but it didn’t last long and didn’t make any money.”-Marlon Brando

“I don’t think that people generally realize what the motion picture industry has done to the American Indian, as a matter of fact, all ethnic groups. All minorities. All non-whites. People just simply don’t realize. They take it for granted that that’s the way people are going to be presented and that these cliches are just going to be perpetuated.”-Marlon Brando

“An actor’s a guy who, if you ain’t talking about him, ain’t listening.”-Marlon Brando

“I have eyes like those of a dead pig.”-Marlon Brando

“That’s the principal guiding feature of all interviews today is money.”-Marlon Brando

“There isn’t anything that pays you as much money as acting while you are deciding what the hell you’re going to do with yourself.”-Marlon Brando