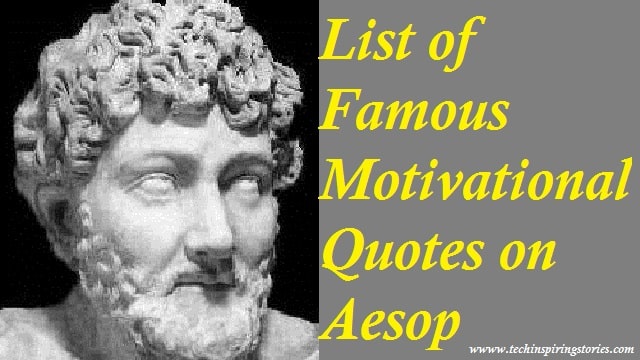 Aesop Quotes:- Aesop was a Greek fabulist and storyteller credited with a number of fables now collectively known as Aesop’s Fables.

Aesop was said to have escaped punishment many times throughout his life, often standing up to his accusers and telling a story that showed the irony or the characteristics of those punishing him.

“We hang the petty thieves and appoint the great ones to public office.”-Aesop

“Beware lest you lose the substance by grasping at the shadow.”-Aesop

“Do not count your chickens before they are hatched.”-Aesop

“We hang the petty thieves and appoint the great ones to public office.”-Aesop

“The level of our success is limited only by our imagination and no act of kindness, however small, is ever wasted.”-Aesop

“United we stand, divided we fall.”-Aesop

“Destroy the seed of evil, or it will grow up to your ruin.”-Aesop

“Slow but steady wins the race.”-Aesop

“We often give our enemies the means for our own destruction.”-Aesop

“The little reed, bending to the force of the wind, soon stood upright again when the storm had passed over.”-Aesop

“A doubtful friend is worse than a certain enemy. Let a man be one thing or the other, and we then know how to meet him.”-Aesop

“Every truth has two sides; it is as well to look at both before we commit ourselves to either.”-Aesop

“Please all and you will please none.”-Aesop

“It is with our passions as it is with fire and water, they are good servants, but bad masters.”-Aesop

“We should look to the mind, and not to the outward appearance.”-Aesop

“The smaller the mind the greater the conceit.”-Aesop

“A crust eaten in peace is better than a banquet partaken in anxiety.”

“Beware that you do not lose the substance by grasping at the shadow.”-Aesop

“Outside show is a poor substitute for inner worth.”-Aesop

“The unhappy derive comfort from the misfortunes of others.”-Aesop

“Affairs are easier of entrance than of exit, and it is but common prudence to see our way out before we venture in.”-Aesop

“It is thrifty to prepare today for the wants of tomorrow.”-Aesop

“Put your shoulder to the wheel.”-Aesop

“The gods help them that help themselves.”-Aesop

“People often grudge others what they cannot enjoy themselves.”-Aesop

“He that always gives way to others will end in having no principles of his own.”-Aesop

“Any excuse will serve a tyrant.”-Aesop