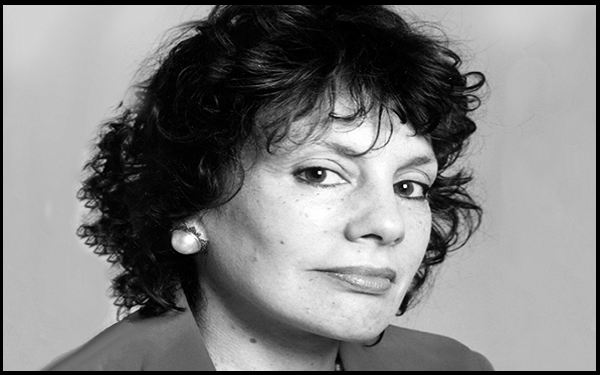 “Hollywood and the recording industry argue that current law permits the copying of songs and movies, and sharing them on the Internet. This enables young people to grow up learning how to steal.”-Suzanne Fields 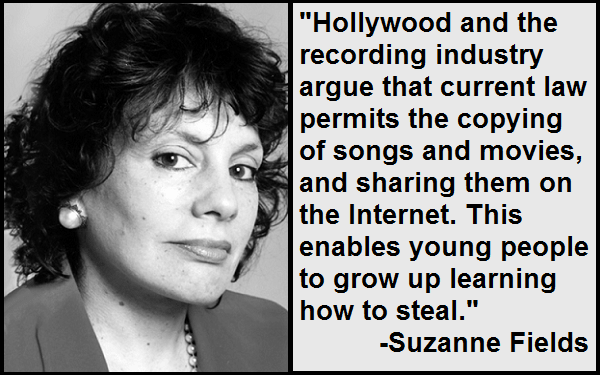 “If any of the beautiful people plan to vote for the president, they usually keep their secret to themselves.”-Suzanne Fields

“It’s long been a cliche in Washington that if you hang a lamb chop in your window, guests will come.”-Suzanne Fields

“Many of the Europeans who want Israel to go away don’t even know why they do. Nearly a third of those interviewed concede they have no idea what the Israeli-Palestinian conflict is all about. It’s enough to know that Israelis are Jews.”-Suzanne Fields

“Sometimes the ignorant are among the most educated.”-Suzanne Fields

“Everybody’s looking for the niche to make the difference. Some people think they see the mother lode in beautiful people, especially the vote of the beautiful women.”-Suzanne Fields

“Dostoevski does not tell you what to think about his legend, but he requires that you think about it. The novelist was a deeply religious man and he always thought many readers missed that point about him.”-Suzanne Fields

“Women can break down barriers to opportunity, and men, many of them reluctantly, have learned to relate to women as their equals in thought and action. But except for an eccentric few, women do not want to become warriors.”-Suzanne Fields

“Most of the debate over the cultures of death and life is about the process. The debate focuses on the technology available to determine how we prolong life and how and when we end it.”-Suzanne Fields

“The death of Pope John Paul II led many of different faiths and of no faith to acknowledge their debt to the Roman Catholic Church for holding on to absolutes that the rest of us can measure ourselves against.”-Suzanne Fields

“We all want to look younger, become stronger and healthier and live longer.”-Suzanne Fields

“That’s what Major League Baseball’s steroid scandal was all about, the hidden harm in competitive sports that sends the wrong message to the young.”-Suzanne Fields

“You still can’t find Israel on a map of the Middle East in a Palestinian schoolbook.”-Suzanne Fields

“Many critics of the Palestinians, especially those in Congress, think the current calm is merely the eye of the storm. That’s why the House of Representatives approved a foreign aid package last week that forbade direct financial assistance to the Palestinian Authority.”-Suzanne Fields

“There are more than a few remnants left in German welfare policy today. Many Germans eagerly condemn Hitler’s fascism but won’t examine the other reasons why the Third Reich succeeded for a season.”-Suzanne Fields

Great Quotes by Suzanne Fields That will Inspire you

“Lebanon is restless, Syria got its walking papers, Egypt is scheduling elections with more than one candidate, and even Saudi Arabia, whose rulers are perhaps more terrified of women than rulers anywhere else in the world, allowed limited municipal elections.”-Suzanne Fields

“Insult is powerful. Insult begets both rage and humor and often at the same time.”-Suzanne Fields

“The old studios that mass-produced dreams are gone with the wind, just like the old downtown theaters that were the temples of the dreams.”-Suzanne Fields

“There is a bright spot or two for the Spaniards. French toast has become freedom toast on the Air Force One breakfast menu, but the Spanish omelet is still a Spanish omelet.”-Suzanne Fields

“HBO has 28 million subscribers, small stuff compared to TBS, which can be seen in 88 million homes.”-Suzanne Fields

“Fast sex, like fast food, is cheap, but it doesn’t nourish the body – or the soul.”-Suzanne Fields

“It’s not very hip to consider the plight of single women who yearn for something so old-fashioned as men.”-Suzanne Fields

“There are enough Poles in Chicago to make up one of the largest cities in Poland.”-Suzanne Fields

“Churchill knew the importance of peace, and he also knew the price of it. Churchill finally got his voice, of course. He stressed strategy, but it was his voice that armed England at last with the old-fashioned moral concepts of honor and duty, justice and mercy.”-Suzanne Fields