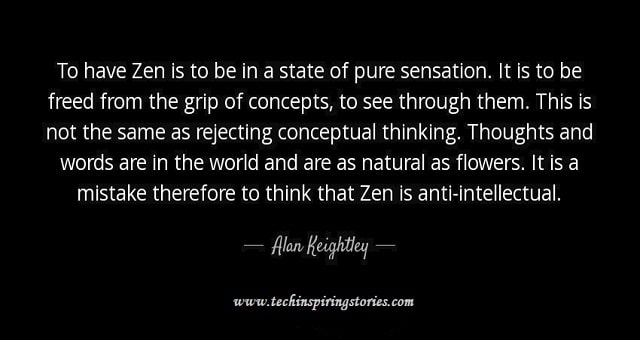 “To have Zen is to be in a state of pure sensation. It is to be freed from the grip of concepts, to see through them. This is not the same as rejecting conceptual thinking. Thoughts and words are in the world and are as natural as flowers. It is a mistake, therefore, to think that Zen is anti-intellectual.”-Alan Keightley

“Where do you need to think for yourself? When we begin to cultivate awareness of our thoughts and emotions, we begin to see just how much we live according to other people’s and society’s beliefs and actions. Don’t get upset by this. Just get in touch with how you really think and feel inside and begin to express your authenticity.”-Alan Keightley

“What is important is not the right doctrine but the attainment of the true experience. It is giving up believing in belief.”-Alan Keightley

“Once in a while, it really hits people that they don’t have to experience the world in the way they have been told to.”-Alan Keightley