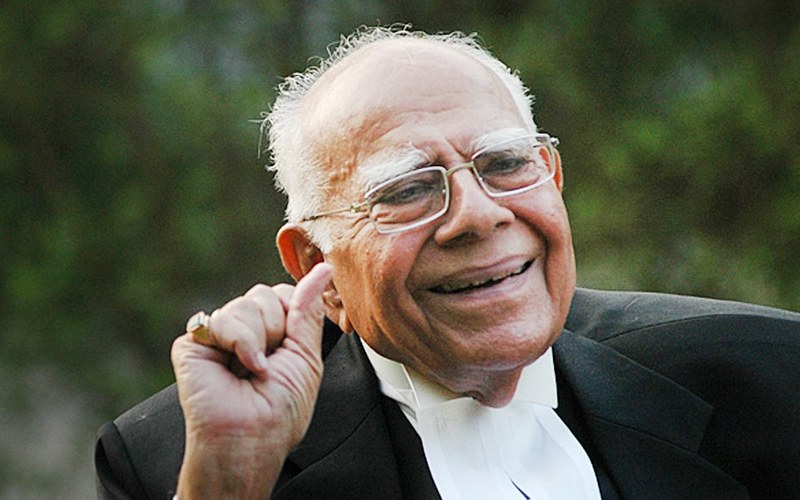 Ram Jethmalani Quotes:-Ram Jethmalani (14 September 1923 – 8 September 2019) was an Indian lawyer and politician. He has served as India’s Union Law Minister and as chairman of the Bar Council of India.

Ram Jethmalani obtained LL.B.degree at the age of 17 and started practicing law in his hometown (in today’s Pakistan) until the partition of India.

He has represented a sweep of cases from the high-profile to the controversial for which he has often faced severe criticism. He was the highest-paid lawyer in the supreme court of India.

“Our growth rate would increase even more dramatically had the Congress Party decided to end corruption and purify itself.”-Ram Jethmalani

“If the people of India are to truly act as ‘sovereign’ they must be fully equipped, through education and information, to discern the unpardonable misdemeanors of their rulers, including of the great Nehru himself. I propose to start with him and then proceed to deal with his successors. The only one amongst his successors who had an unblemished tenure, unfortunately, cut short by cruel providence, was the late Lal Bahadur Shastri.”-Ram Jethmalani

“The essence of a democracy is not controlling governance and the national exchequer through cobbled up numbers, as has been the UPA’s fig leaf for staying in power, but through fulfilling the aspirations and ensuring the well being of the people through enlightened, responsible, and accountable actions of elected representatives.”-Ram Jethmalani

“A word of advice to Rahul: ‘Find your life where your heart is, young man. It is not too late. You cannot claim India as your birthright. Forget about ruling this country and the Cosa Nostra.’ And tola famiglia, I can only think of quoting from Cromwell, ‘You have sat too long for any good you have been doing lately… Depart, I say; and let us have done with you. In the name of God, go!”-Ram Jethmalani

“Indira Gandhi left behind several legacies—dynastic rule, economic control through populism—such as, bank nationalization, Garibi Hatao, and the 20-point program—but most importantly, she left behind a centralized institutionalization of political corruption that has matured into another Frankenstein, devouring the nation and the poor of India.”-Ram Jethmalani

“The function of the judge is to see that the law is enforced and the lawbreaker punished. Today the Rule of Law is unfortunately displaced by the rule of successive scams. The soul of Law is in torment. Good lawyers and all good men can see that law enforcement is suffering from a lack of oxygen. It needs fresh air to fuel the combustion hidden in its heart.”-Ram Jethmalani

“It is time for us to behave like a self-respecting nation instead of encouraging spurious politeness and wasted hospitality. We have had enough of this futility during the last few decades. It is now time for India to reclaim her lost pride”-Ram Jethmalani

“Humanity will continue to produce evil men who mesmerize others of lesser education and lower understanding by taking away from them their critical faculties of constantly examining and evaluating their political leaders. Democracy is like a swimming pool. If you do not periodically change the water, it will almost certainly turn into a stinking cesspool.”-Ram Jethmalani

“Without any qualifications whatsoever, Sonia Gandhi fancies herself as an uncrowned empress of India and has psychologically bulldozed her similarly unqualified son into believing that India’s prime ministership is his birthright. For a long time, I did not believe that he would succumb to his mother’s monarchical passion.”-Ram Jethmalani