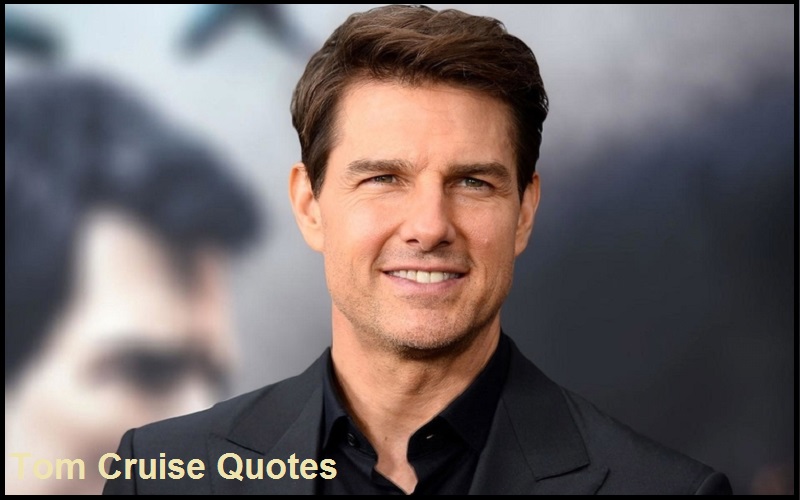 Tom Cruise Quotes:- Tom Cruise (born July 3, 1962) is an American actor and film producer. He has received several accolades for his work, including three Golden Globe Awards and nominations for three Academy Awards.

Cruise is one of the best-paid actors in the world, and his films have earned over $3.9 billion in North America; he is one of the highest-grossing actors of all time.

“If I don’t talk about my religion, if I say I’m not discussing it or different humanitarian things I’m working on, they’re like, ‘He’s avoiding it.’ If I do talk about it, it becomes, ‘Oh, he’s proselytizing.”-Tom Cruise 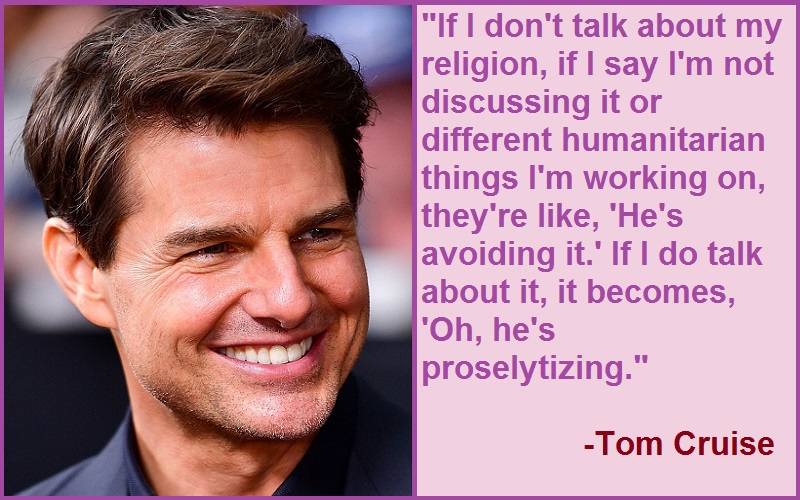 “I like to work with people that I like hanging out with, that I admire, that is really smart and talented, and we can problem-solve together.”-Tom Cruise

“I always look for a challenge and something that’s different.”-Tom Cruise

“I love kids. I was a kid myself, once.”-Tom Cruise

“I’m an all-or-nothing kind of person, and when I become interested in something, I give it my all.”-Tom Cruise

“When I first started out all the attention could be a bit unnerving, especially when people stared. Now I find the best thing is to just relax. Being recognized is just something you have to get used to.”-Tom Cruise

“I look at the Samurai because they were the artists of their time. What I think struck me when I read Bushido is compassion. ‘If there’s no one there to help, go out and find someone to help.’ That hit me because I try to lead my life like that.”-Tom Cruise

“Every single time I start to do a picture, without fail, I feel as if I don’t know what I’m doing.”-Tom Cruise

“When you become successful in any type of life, there are people who are not contributing to the motion.”-Tom Cruise

“When you have to cope with a lot of problems, you’re either going to sink or you’re going to swim.”-Tom Cruise

“I disagree with people who think you learn more from getting beat up than you do from winning.”-Tom Cruise

“I have respect for what other people believe. What I believe in my own life is that it’s a search for how I can do things better, whether it’s being a better man or a better father or finding ways for myself to improve.”-Tom Cruise

“Awards are wonderful. I’ve been nominated many times and I’ve won many awards. But my journey is not towards that. If it happens it will be a blast. If it doesn’t, it’s still been a blast.”-Tom Cruise

“If you have kids, it is the most important thing to create good times.”-Tom Cruise

“I love what I do. I take great pride in what I do. And I can’t do something halfway, three-quarters, nine-tenths. If I’m going to do something, I go all the way.”-Tom Cruise

“When I work, I work very hard. So I look to work with people who have that level of dedication. And I depend on that from everyone. From the director to my crews that I work with.”-Tom Cruise

“What I find sometimes that is tricky is if actors are using too much of their own lives in a picture, in a scene, they get locked into a particular way to play the scene, and it lacks immediacy.”-Tom Cruise

“Have you ever gotten the feeling that you aren’t completely embarrassed yet, but you glimpse tomorrow’s embarrassment?”-Tom Cruise

“I would live with all of my sisters if I could. We’ve always been very close, my sisters and me.”-Tom Cruise

“Saddam has committed many crimes against humanity and against his own people.”-Tom Cruise

“Whether it’s making a film or raising my children, personally I’m striving to do the right things and to learn.”-Tom Cruise