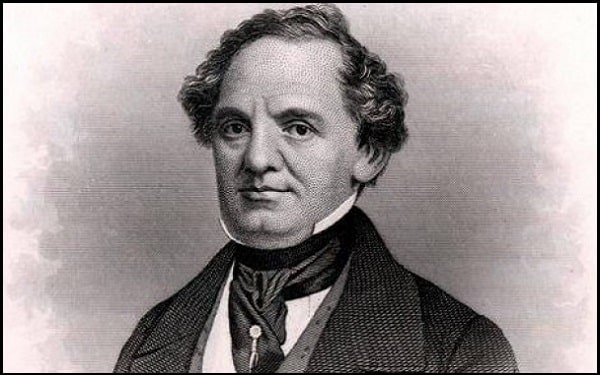 “A lovely nook of forest scenery, or a grand rock, like a beautiful woman, depends for much of its attractiveness upon the attendance sense of freedom from whatever is low; upon a sense of purity and of romance.”-P T Barnum 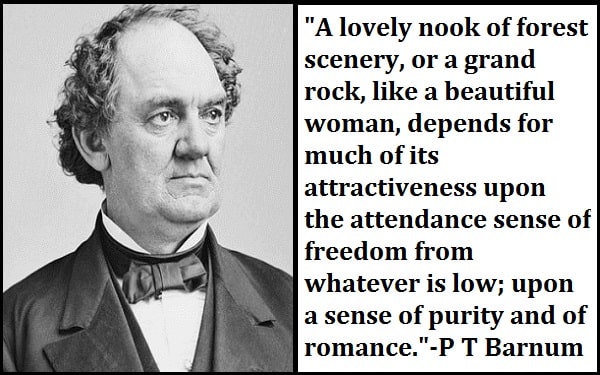 “Whatever you do, do it with all your might. Work at it, early and late, in season and out of season, not leaving a stone unturned, and never deferring for a single hour that which can be done just as well now.”-P T Barnum

“Money is in some respects life’s fire: it is a very excellent servant, but a terrible master.”-P T Barnum

“He who is without a newspaper is cut off from his species.”-P T Barnum

“Clowns are the pegs on which the circus is hung.”-P T Barnum

“Every crowd has a silver lining.”-P T Barnum

“As a general thing, I have not ‘duped the world’ nor attempted to do so… I have generally given people the worth of their money twice told.”-P T Barnum

“Politics and government are certainly among the most important of practical human interests.”-P T Barnum

“Science is the pursuit of pure truth and the systematizing of it.”-P T Barnum

“Medicine is the means by which we poor feeble creatures try to keep from dying or aching.”-P T Barnum

“Witchcraft is one of the most baseless, absurd, disgusting and silly of all the humbugs.”-P T Barnum

“The foundation of success in life is good health: that is the substratum fortune; it is also the basis of happiness. A person cannot accumulate a fortune very well when he is sick.”-P T Barnum

“Literature is one of the most interesting and significant expressions of humanity.”-P T Barnum

“The true economy consists of always making the income exceed the out-go. Wear the old clothes a little longer if necessary; dispense with the new pair of gloves; mend the old dress: live on plainer food if need be; so that, under all circumstances, unless some unforeseen accident occurs, there will be a margin in favor of the income.”-P T Barnum

“Politeness and civility are the best capital ever invested in the business. Large stores, gilt signs, flaming advertisements, will all prove unavailing if you or your employees treat your patrons abruptly. The truth is, the more kind and liberal a man is, the more generous will be the patronage bestowed upon him.”-P T Barnum

“Unless a man enters upon the vocation intended for him by nature, and best suited to his peculiar genius, he cannot succeed. I am glad to believe that the majority of persons do find their right vocation.”-P T Barnum

“No man has a right to expect to succeed in life unless he understands his business, and nobody can understand his business thoroughly unless he learns it by personal application and experience.”-P T Barnum

“There is scarcely anything that drags a person down like debt.”-P T Barnum

“Fortune always favors the brave, and never helps a man who does not help himself.”-P T Barnum

“The show business has all phases and grades of dignity, from the exhibition of a monkey to the exposition of that highest art in music or the drama which secures for the gifted artist’s world-wide fame princes well might envy.”-P T Barnum

“There is no such thing in the world as luck. There never was a man who could go out in the morning and find a purse full of gold in the street to-day, and another to-morrow, and so on, day after day: He may do so once in his life; but so far as mere luck is concerned, he is as liable to lose it as to find it.”-P T Barnum

“To me, there is no picture so beautiful as smiling, bright-eyed, happy children; no music so sweet as their clear and ringing laughter.”-P T Barnum