Motivational Rollo May Quotes And Sayings 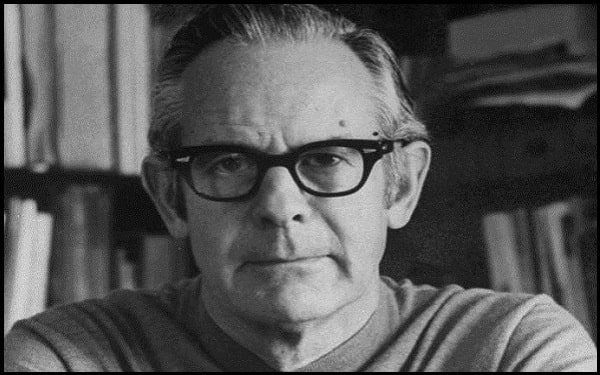 “The relationship between commitment and doubt is by no means an antagonistic one. Commitment is healthiest when it’s not without doubt but in spite of doubt.”-Rollo May 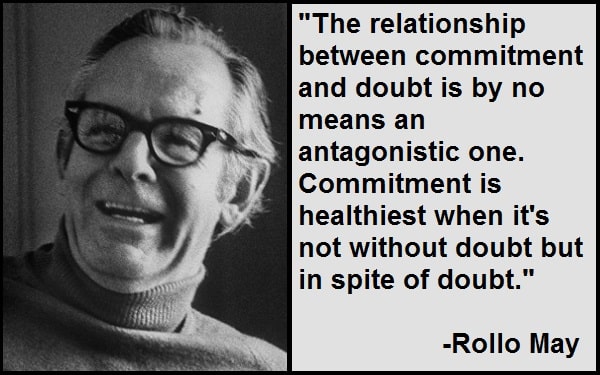 “Freedom is man’s capacity to take a hand in his own development. It is our capacity to mold ourselves.”-Rollo May

“Creativity is not merely the innocent spontaneity of our youth and childhood; it must also be married to the passion of the adult human being, which is a passion to live beyond one’s death.”-Rollo May

“Care is a state in which something does matter; it is the source of human tenderness.”-Rollo May

“Hate is not the opposite of love; apathy is.”-Rollo May

“Joy, rather than happiness, is the goal of life, for joy is the emotion that accompanies our fulfilling our natures as human beings. It is based on the experience of one’s identity as a being of worth and dignity.”-Rollo May

“One does not become fully human painlessly.”-Rollo May

“Courage is not the absence of despair; it is, rather, the capacity to move ahead in spite of despair.”-Rollo May

Famous Rollo May Quotes About Communication

“Communication leads to community, that is, to understanding, intimacy and mutual valuing.”-Rollo May

“The opposite of courage in our society is not cowardice, it is conformity.”-Rollo May

“The human dilemma is that which arises out of a man’s capacity to experience himself as both subject and object at the same time.”-Rollo May

“The compelling drive to get at the truth is what improves us all as psychologists and is part and parcel of intellectual integrity. But I do urge that we not let the drive for honesty put blinders on us and cut off our range of vision so that we miss the very thing we set out the understand – namely, the living human being.”-Rollo May

“The emergence of the Atomic Age brought the previously inchoate and ‘free-floating’ anxiety of many people into sharp focus.”-Rollo May

“I have long believed that love and will are interdependent and belong together. Both are conjunctive processes of being – a reaching out to influence others, molding, forming, creating the consciousness of the other.”-Rollo May

“The striking thing about love and will in our day is that, whereas in the past they were always held up to us as the answer to life’s predicaments, they have now themselves become the problem.”-Rollo May

“The problems of a period are the existential crises of what can be but haven’t yet been resolved; and regardless of how seriously we take that word ‘resolved,’ if there were not some new possibility, there would be no crisis – there would be only despair.”-Rollo May

Best Rollo May Quotes About Freedom

“Human dignity is based upon freedom and freedom upon human dignity. The one presupposes the other.”-Rollo May

“Freedom always deals with ‘the possible’; this gives freedom of its great flexibility, its fascination, and its dangers.”-Rollo May

“Problems are the outward signs of unused inner possibilities.”-Rollo May

“Every being has the need not only to be but to affirm his own being. This is especially significant for the human organism, for it is gifted with, or condemned to, self-consciousness.”-Rollo May

“A myth is a way of making sense in a senseless world. Myths are narrative patterns that give significance to our existence.”-Rollo May

“Memory depends mainly upon myth. Some even occur in our minds, in actuality or in fantasy; we form it in memory, molding it like clay day after day – and soon we have made out of that event a myth. We then keep the myth in memory as a guide to future similar situations.”-Rollo May

“Social acceptance, ‘being liked,’ has so much power because it holds the feelings of loneliness at bay.”-Rollo May

“We are anxious because we do not know what roles to pursue, what principles for action to believe in. Our individual anxiety, somewhat like that of the nation, is a basic confusion and bewilderment about where we are going.”-Rollo May