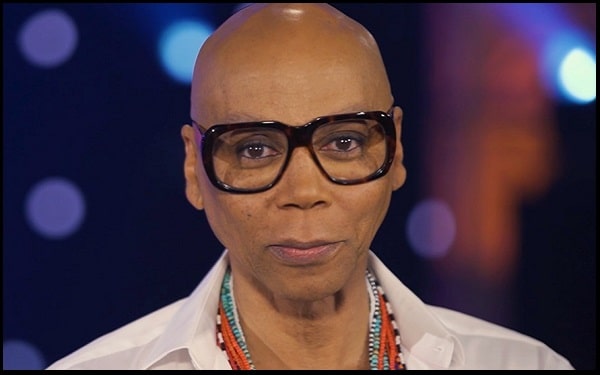 “I always bring an orange scarf, not just so I can wear it or tuck it into my pocket, but also so I can throw it over a lamp in the hotel room. Orange is my favorite color, and it gives a lovely, warm ambiance.”-RuPaul 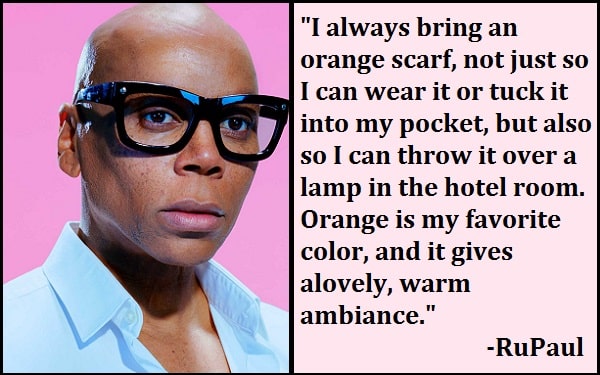 “If you’ve worked in a factory, and you haven’t learned how to do something else, you’re obsolete. That’s just nature.”-RuPaul

“We encrypt ‘Drag Race’ with the secret language that kept gay people linked for many years before the ’80s.”-RuPaul

“A regular old drag queen is usually your science teacher who’s actually wearing women’s panties underneath his slacks. A drag-queen superstar is someone who actually works in clubs and makes a living doing it more than one night a year or even one night in six months.”-RuPaul

“I think this life is hard without assistance from others.”-RuPaul

“Drag is involved with changing identities and not taking identities too seriously at all. That’s why drag is such a hard sell to a network – or anyone, really – because it’s up against the ego.”-RuPaul

“The only person I look up to – and not just in show business but also in the world – is a little lady named Judge Judy! Honestly.”-RuPaul

“From childhood, we’re trained to be a certain way, to behave a certain way – so that the power base can control us, really. And punk and drag are completely outside of that.”-RuPaul

“Throughout my life, I have always believed in love; I’ve always put my heart in love. But I’ve seen fear take people so often. It’s very scary.”-RuPaul

“I think our culture is moving forward – slowly. And also, as we move forward, we’re witnessing some of the old stalwarts rejecting that forward motion.”-RuPaul

“The whole point is to live life and be – to use all the colors in the crayon box.”-RuPaul

“There are so many sensitive souls; they don’t know what to do with their feelings.”-RuPaul

“It’s hard to get intimate with an audience.”-RuPaul

“I try to do three active things a day because I have to fit into costumes that are very tight.”-RuPaul

“I’m not religious, but I do pray. It’s 60 seconds of meditation, visualizing myself, looking at myself, and being conscious of my own consciousness. That will align me for the rest of the day.”-RuPaul

“I go to the gym at five in the morning and then go do a hike.”-RuPaul

“Once you clear out from your consciousness things that no longer matter, you’re able to make room for other things.”-RuPaul

“I’ve been very blessed, and that has not escaped me.”-RuPaul

“Life is not to be taken seriously.”-RuPaul

“If you look at their voting habits and their eating habits, you realize people are stupid.”-RuPaul

“There’s not another lip-synch song on the planet, in the history of lip-synching songs, that has been lip-synched more than ‘I Will Survive.'”-RuPaul

“I dance to the beat of a different drummer.”-RuPaul

“If you’re upset by something I said, you have bigger problems than you think.”-RuPaul

“Unfortunately, in our culture, one person can write a letter to the network, and they shut something down. It’s unfortunate.”-RuPaul

“This is an important thing: People who live in the mainstream and the status quo think that everyone else is there to serve them.”-RuPaul

“People don’t know how to place me in their consciousness. They think, ‘Oh, you must be here to make me look good. That’s what gay guys are, right? You’re an accessory for my straight life.’ Just because your limited view is that everyone’s there to serve you and that you’re the only person in the world. It doesn’t work that way.”-RuPaul

“It’s true in everything, not just in drag: To be a success, you have to understand the landscape. You have to know thyself, and you have to know your history so that you can draw from people who have figured out the equation you are faced with. It’s not rocket science.”-RuPaul

“We, humans, are still a very primitive culture, and it’s one of the traps we’ve fallen into over the course of our lives – to forget our history. That’s why George Orwell’s ‘Animal Farm’ is so profound. It chronicles our short memory.”-RuPaul

“I love Ashford & Simpson, and I love the Brothers Gibb. They are amazing.”-RuPaul

“Usually, people who don’t have a broad perspective see gay people as servants – as people who are there to make them look good.”-RuPaul

“I love drag, and I love people who gravitate toward it. Because the people who do drag are people who dance to the beat of a different drummer.”-RuPaul

“It’s important to remember that you’re born naked, and the rest is a drag.”-RuPaul

“The only time you will ever see me in drag is when I am – What? Getting paid. It is my job.”-RuPaul

“My love life has never been of interest to people. Of course, I have a love life; I have a real-life outside of show business.”-RuPaul

“I’ve cried my eyes out and wanted to end it all before. I hope everybody’s gone that far because it makes life rich.”-RuPaul

“People deal with grief in many different ways. And some people in show business parade their relationships around like an accessory, and others like to keep it separate from business and commerce. It’s perfectly fine to say, ‘I actually don’t want to talk about my love because that’s not part of the fantasy world I created in commerce.'”-RuPaul

“For both men and women, an eyelash curler is a must. It gives your eye the appearance of being well-rested and wide open.”-RuPaul

“Having an automobile in Los Angeles enables me to change clothes at least three times a day: I will go from western wear to nautical to Savile Row in the course of 12 hours.”-RuPaul

“The secret of success in every field is redefining what success means to you. It can’t be your parent’s definition, the media’s definition, or your neighbor’s definition. Otherwise, success will never satisfy you.”-RuPaul

“Personally, I experience success when I enjoy what I’m doing. I love the creative process, even if the end result isn’t embraced by anyone else.”-RuPaul

“I love the games. My favorite thing on this planet to do is to play games. And if you don’t enjoy games, then you’re really missing the point of what this life is.”-RuPaul

“People can identify as however you want to. Right on. Go for it. But my strategy in this bigger game of life is to not identify as anything.”-RuPaul

“Mainstream’s never appealed to me, really. I mean, I’ve become popular over the years in certain areas. But the mainstream, you know, I would rather the mainstream come to me.”-RuPaul

“I’ve always been drawn to people who dance to the beat of a different drum; it didn’t matter if they were in film or music or fashion.”-RuPaul

“I had mentors, growing up in gay life – older gay men who told me about our history and the history of art and culture – but somehow, the younger generation missed out on that synergy.”-RuPaul

“Young people need to know there are ways for them to navigate this life.”-RuPaul

“Life is dangerous. There are no guarantees.”-RuPaul

“If you grow up in show business, you look beyond the looking glass. So, all of the surface facades get broken.”-RuPaul

“I loved ‘Carol.’ I thought it was a beautiful film.”-RuPaul

“Hollywood is an idea. It’s not a real place.”-RuPaul

“Anna Wintour is a very smart woman. She’s a Scorpio, like me.”-RuPaul

“I started out in this business in rock and roll bands and stumbled into drag. Drag just happened to be my vehicle for my creativity. So, you know, it’s afforded me the opportunity to create new shows, to make music.”-RuPaul

“It’s very easy to look at the world and think this is all so cruel and so mean. It’s important to not become bitter from it.”-RuPaul

“All things to do with drag are inherently therapeutic because the realization of your own insanity is the beginning of sanity.”-RuPaul

“Doing drag in a male-dominant culture is an act of treason. It’s the most punk-rock thing you can do.”-RuPaul

“I’ve been on both sides; I’ve interviewed people, and I do an okay job, I guess. But it’s awful. Because you feel like you have to defend your life, which is such an interesting concept. It’s not an easy process to sit down and talk about, ‘What’s your motivation?’ Because as I’m answering, I’m working it out for myself at the same time.”-RuPaul

“The number one taboo for boys is to be feminine, so for someone to not only override their internal directive but society’s directive is mind-boggling and heroic. It’s courageous.”-RuPaul