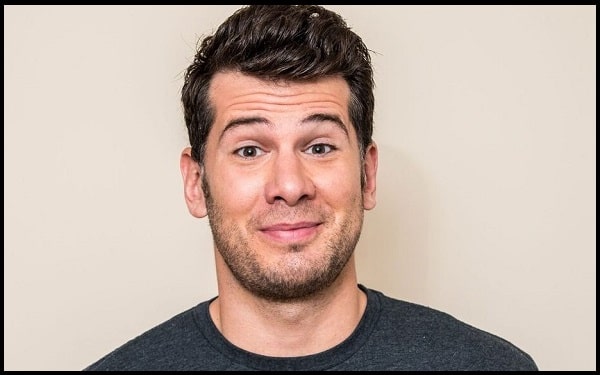 Steven Crowder Quotes:- Steven Crowder (born July 7, 1987) is a conservative Canadian-American commentator, actor, and comedian. He hosts a YouTube show, Louder with Crowder, and is a former contributor at Fox News.

“For years, young adults have adopted extremely liberal world views in their attempts to be different, ultimately failing to see the irony that they’ve all become the same.”-Steven Crowder 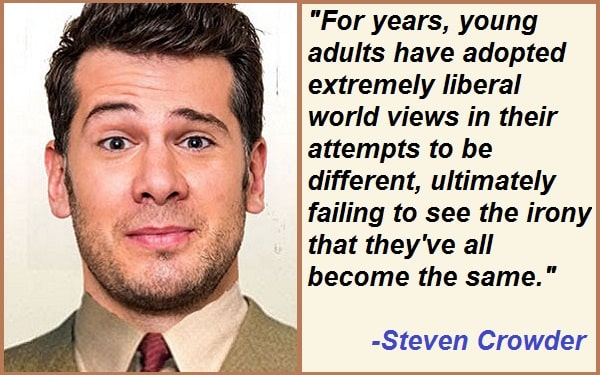 “At the end of the day, when I kick back with some barbecue and a CokeZero in front of a blockbuster film playing within the convenience of my fully air-conditioned house, I’ll say a small prayer thanking God for the American culture.”-Steven Crowder

“Liberals don’t believe in the ultimate concept of self-reliance, which is why they look to the government for stability.”-Steven Crowder

“It’s no secret that the environmental movement is ultimately designed to create new inroads into increased government control. All of the shots taken at emissions, the dependence on fossil fuels, and noise pollution are designed to paint those things as symptoms of a problem, with the government able to step in as the solution.”-Steven Crowder

“Everybody has an angle. The only time I say no to an interview is when someone says they don’t have an angle. I know right away that that’s not honest.”-Steven Crowder

“Your wedding can be the most memorable day and night of your life… or just another party.”-Steven Crowder

“I’m guessing that the ability to withstand peer pressure and adhere to one’s values might translate to the kind of backbone necessary for a successful lifelong relationship.”-Steven Crowder

“More often than not, people who are poor… are right where they should be.”-Steven Crowder

“I consider myself to be a man with my priorities in order.”-Steven Crowder

“Listen, one doesn’t need to be religious (nor a rocket scientist) to see the value of abstinence.”-Steven Crowder

“Needless to say, oftentimes a ‘religion’ is not needed to breed extremism. People breed it all by themselves, oftentimes with the subjective morality of modern secularism breeding the worst kind.”-Steven Crowder

“America has no culture!’ is a phrase that we’ve all heard many times in our lives. As is often the case, a lie repeated often enough becomes an assumed truth (kind of like the tall tale of Janeane Garofalo being a comedian).”-Steven Crowder

“People come to this country because they view our culture as the best. It is culture free of persecution, a culture free of an oppressive government, and above all… a culture of really, really cool stuff.”-Steven Crowder

“Not only have individual politicians and celebrities personally condemned your automobiles for being too messy, noisy, and harmful to the common good, but they’ve tried to affect the natural market through taxes on larger vehicles along with incentives and quotas for ‘greener’ cars.”-Steven Crowder

“Whether you see Jesus as nothing more than a mythical figure or not, there’s no doubt that living your life in a Christ-like manner is a lot harder than the hedonistic lifestyle reflected in Hollywood.”-Steven Crowder

“The message bombarding young adults from the leftist cultural elite is clear; you should think for yourself… by adopting my beliefs as your own.”-Steven Crowder

“Call me old-fashioned, but it’s always been my firm belief that a teacher’s job should be for each of his or her students to finish the year with a grade of 100%.”-Steven Crowder

“Unless taught otherwise, children are the most selfish, oblivious little Philistines on the planet. They have no family, no job, no responsibilities, and nothing but time to think about their gluttonous, sticky selves. We should be teaching them to take some focus off of themselves and onto how they can best serve/treat others.”-Steven Crowder

“Often, my liberal Canadian brethren will claim that ‘Canada doesn’t get involved in foreign affairs or wars overseas. We turn the other cheek.’ No. Canada doesn’t have the military might to exercise any option other than to remain uninvolved. They aren’t turning the other cheek. They’re pulling a Sweden.”-Steven Crowder

“All of my videos, everything I upload is short and edited.”-Steven Crowder

“North Korea is really just the kid who decided he’d be ‘all-out crazy,’ hoping people would be scared off by the tirades and avoid stepping up to the plate.”-Steven Crowder

“To a straight man, the notion of walking around as a coiffed, waxed, nail-polish-wearing, lispy dude is uproariously absurd. As people, we find absurdities funny. That’s our first step in making sense of them.”-Steven Crowder

“Looking back, when I was fourteen, I aspired to… be the best believer, husband, father, businessman, and man of integrity that I can be.”-Steven Crowder

“As someone who comes from a family of lifers (along with my wife), I just want to say, flat out… Marriage is a really good deal.”-Steven Crowder

“Whether you’re young old, male, female, marriage (when done correctly) will make your life – and this country – better off.”-Steven Crowder

“It would almost seem that – dare I say this – private transportation is more efficient than mass public-transit!”-Steven Crowder

“Real or not, when a person denies God, they often try and fill that higher power void with something else.”-Steven Crowder

“The topic of Sarah Palin has been open season to the media, entertainment industry, and club comics alike.”-Steven Crowder

“Every manly icon the West has ever admired has embodied the very spirit of American independence.”-Steven Crowder

“Unless those of us who love our wives (and thus, our lives) make a conscious change to the way we speak of them, unless we begin choosing to elevate and praise our spouses instead of denigrating, we will be letting an incredibly corrosive, self-perpetuating societal meme destroy the very institution that defines our lives.”-Steven Crowder

“Essentially, Robin Hood put a smackdown on the medieval equivalent of the IRS.”-Steven Crowder

“Hipsters. We all know one. They’re those fun, little, arrogant people who let the ideal of ‘anti-consumerism,’ combined with a hatred for all things normal, dictate their every action.”-Steven Crowder

“Whether it’s spending more time and money at thrift shops for threads (anti-consumerist threads, mind you), or combing the record store for the most unknown/least coherent band they can find, there’s one thing that hipsters constantly want you to know: that they are better than you.”-Steven Crowder

“The truth is that the gossip-hounds in Tinsel Town and the cackling windbags at ‘The View’ don’t want civility. They want catty (or dare I say it gay-ish) gossip and sensational headlines that provide them with an opportunity to hop on the bully pulpit.”-Steven Crowder

“When it comes to the liberal agenda, it’s more important to pigeonhole people than it is to speak the truth.”-Steven Crowder

“Tinseltown really likes to think that they have a handle on all things ‘love.’ After all, they’ve turned it into a billion-dollar industry with romance films, trashy TV shows, and ‘who’s-dating-who’ tabloids.”-Steven Crowder

“The Western world needs to ally themselves against the evil that is political Islam. To unite with its practitioners would be to unite with evil. Anyone who sees that as a virtue is simply enabling evil and, by proxy, is evil themselves.”-Steven Crowder

“If you want to practice Islam in the inconsequential, semi-secular sense, fine.”-Steven Crowder

“President Obama… is a wimp.”-Steven Crowder

“Comparing President Obama with the great leaders who have come before he is painful.”-Steven Crowder

“When I see out-of-shape, overweight people huffing and puffing in the gym, my eyes well up with tears of pride. I want to walk over to them, hug them, and say, ‘Good on you for getting in here. It gets better!’ You know why? Because they’re challenging themselves.”-Steven Crowder

“I spent a lot of my life afraid as a kid, even throughout high school.”-Steven Crowder

“I think that if every Christian acted like Christ, the world would be a better place. If every Muslim acted like Muhammad, according to modern law, they would have to be jailed.”-Steven Crowder

“You can be a namby-pamby leftie, a gun-toting neo-con, or a soft, indecisive moderate. I really don’t care. Just don’t lie to me.”-Steven Crowder

“People can hold any opinion that they want on any subject that they choose. Just don’t proactively lie to people. It’s a simple request, really, and one that we don’t hear nearly enough.”-Steven Crowder

“Joy Behar… It is never even funny accidentally.”-Steven Crowder

“I still can’t decide which is silliest; a person believing in a God who ‘isn’t there,’ or a person offended by a God whom he doesn’t believe exists.”-Steven Crowder

“If I hadn’t been raised in such a logical household, the entertainment industry would have elicited only one reaction from me in regards to ‘Christians’: ‘Good God, these people are crazy.”-Steven Crowder

“Even though ripping on those of the Christian cloth is nothing new, edgy, or thought-provoking, Hollywood feels the need to do it with each of their religious overtones talkies.”-Steven Crowder

“We all know that Kim Jong-il is ‘buy-yourself-a-handgun’ crazy. It’s pretty much a given.”-Steven Crowder

“Why on Earth would the United States ever want to be more like Europe? Correct me if I’m wrong, but we left, did we not? Not only did we leave that older, lesser world behind, but we left skid-marks along the way with an entire continent eating our proverbial dust.”-Steven Crowder

“I guess as far as leftists are concerned, the United States can’t qualify as a ‘cultured society’ simply because we’ve actually created a society that works.”-Steven Crowder

“If appeasing other nations means that we need to begin acting like them, you can count me out.”-Steven Crowder

“One of my goals in life is to watch political correctness shrivel up and die (as it should be for any true conservative).”-Steven Crowder

“I’m a pansy when compared to the men and women of the United States military.”-Steven Crowder

“Nobody likes being broke. As somebody who’s had to live out of a 1982 Datsun, trust me. I know. I also understand that the first step to improving your situation is to fix the problem that landed you there in the first place.”-Steven Crowder

“The mistake that all ‘long-term poor people’ make is putting others under a microscope in an attempt to set blame. That right there is a true loser’s mentality (or ‘poppycock’ if you will).”-Steven Crowder

“Death is not only a passing on but a time for everyone else to truthfully reflect on one’s life.”-Steven Crowder