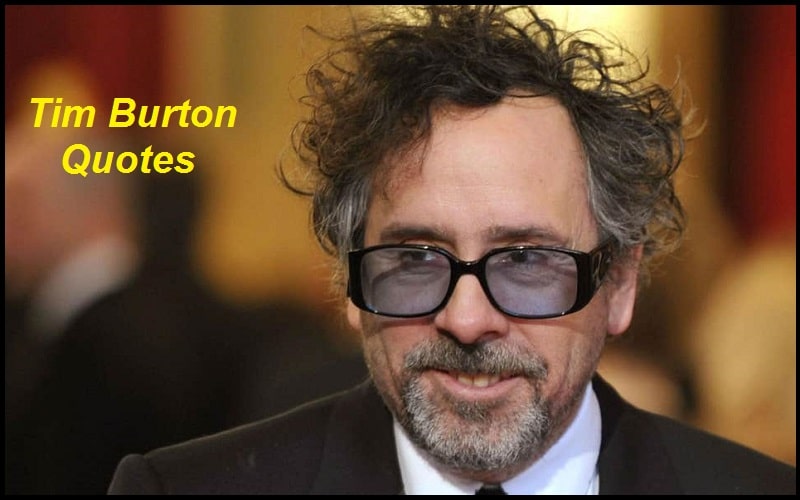 “I never really got nightmares from movies. In fact, I recall my father saying when I was three years old that I would be scared, but I never was.”-Tim Burton 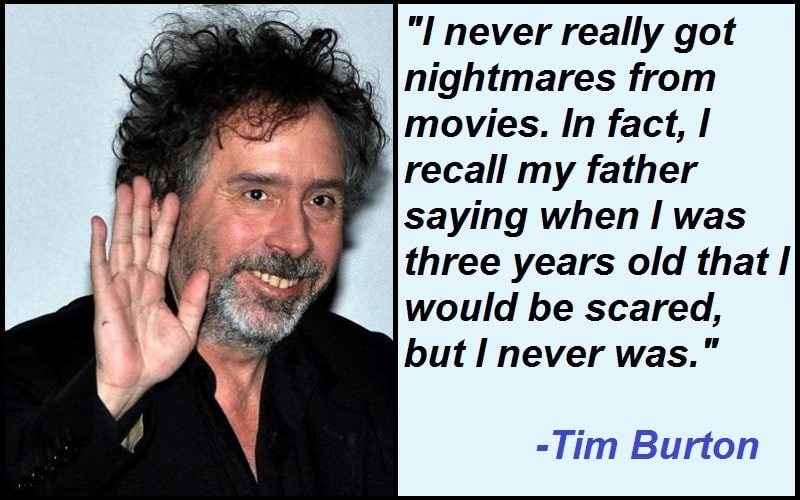 “When I was growing up, Dr. Seuss was really my favorite. There was something about the lyrical nature and the simplicity of his work that really hit me.”-Tim Burton

“It’s good as an artist to always remember to see things in a new, weird way.”-Tim Burton

“Visions are worth fighting for. Why spend your life making someone else’s dreams?”-Tim Burton

“Anybody who knows me knows I would never read a comic book.”-Tim Burton

“I can’t remember any dreams in my life. There’s so much strange in real life that it often seems like a dream.”-Tim Burton

“Anybody with artistic ambitions is always trying to reconnect with the way they saw things as a child.”-Tim Burton

“I did some sports. It was a bit frustrating. I wasn’t the greatest sportsperson.”-Tim Burton

“When people are deprived of a sense, their other senses get heightened. If you’re culturally devoid of something – of weather, of artistry, of interesting architecture, all the way down the line to culture itself – you’re either forced to give in and get that car dealership, or you manufacture those things for yourself.”-Tim Burton

“I’ve always been more comfortable making my decisions from the subconscious level, or more emotionally because I find it is more truthful to me; Intellectually, I don’t think like that because I get uncomfortable.”-Tim Burton

“There’s something about seeing this little inanimate object coming to life that’s just very exciting. That’s why with ‘Nightmare’ I held out for so long to do it.”-Tim Burton

“Things that I grew up with stay with me. You start a certain way, and then you spend your whole life trying to find a certain simplicity that you had. It’s less about staying in childhood than keeping a certain spirit of seeing things in a different way.”-Tim Burton

“A lot of things you see as a child remain with you… you spend a lot of your life trying to recapture the experience.”-Tim Burton

“I think a lot of kids feel alone and slightly isolated and in their own world.”-Tim Burton

“I am not a dark person and I don’t consider myself dark.”-Tim Burton

“Movies are like an expensive form of therapy for me.”-Tim Burton

“I never saw Frankenstein or King Kong or the Creature from the Black Lagoon as bad guys. They were the good guys.”-Tim Burton

“I started to do stop-motion when I was a kid. You take a Super 8 and make some models, and move, click, move, click. All that. I love all forms of animation, but there is something unique and special to stop-motion: it’s more real and the set is lit like a set. But I think it’s also a kind of lonely and dark thing to want to do.”-Tim Burton

“It’s hard to find logic in things sometimes. That’s why I can’t analyze things too much because it often doesn’t make much sense.”-Tim Burton

“It’s people who you’ve seen that have given you a lot. In some ways, I felt they helped me psychologically because you see these people up on the screen going through torment and being on the outside, and somehow you relate to them, and it helps you get through life. It’s a real honor and pleasure to then meet these people.”-Tim Burton

“There’s something quite exciting when you have a history with somebody and you see them do new and different things.”-Tim Burton

“One person’s craziness is another person’s reality.”-Tim Burton

“In Hollywood, they think drawn animation doesn’t work anymore, computers are the way. They forget that the reason computers are the way is that Pixar makes good movies. So everybody tries to copy Pixar. They’re relying too much on the technology and not enough on the artists.”-Tim Burton

“It’s like getting into a film – I didn’t say early on, ‘I’m going to become a filmmaker,’ ‘I’m going to show my work at MoMA.’ When you start to think those things, you’re in trouble.”-Tim Burton

“To be honest, whatever troubles I’ve had, I’ve also gotten the opportunities to do things.”-Tim Burton

“Jack Nicholson is a textbook actor who’s very intuitive. He is absolutely brilliant at going as far as you can go, always pushing to the edge, but still making it seem real.”-Tim Burton

“If I’d said, ‘I’m going to be a director,’ it probably wouldn’t have happened.”-Tim Burton

“I guess I feel so tortured most of the time, when I see someone else feeling tortured, I get a little perverse glee out of it.”-Tim Burton

“I wouldn’t know a good script if it bit me in the face.”-Tim Burton

“Whether you like it or not, a child really connects you to that time when everything’s new. It’s so important – not just for artistic endeavors, but for humanity.”-Tim Burton

“If I had a choice about going to a meeting at a studio or changing a nappy, I’d choose the nappy.”-Tim Burton

“I get so tired of people saying, ‘Oh, you only make fantasy films and this and that’, and I’m like, ‘Well no, fantasy is a reality’, that’s what Lewis Carroll showed in his work.”-Tim Burton

“You don’t know whether chimps are going to kill you or kiss you. They’re very open on some levels and much more evil in a certain way.”-Tim Burton

“Working on ‘Nightmare Before Christmas,’ I had endless arguments, like the studio saying, ‘You can’t have a main character that’s got no eyeballs!’ ‘How is anybody going to feel for somebody with just eyesockets?’ Do you know? So, it’s those kinds of things that really wear you down.”-Tim Burton

“Things like ‘mad as a hatter’ or ‘grinning like a Cheshire cat’, are so powerful that music and songs incorporate the imagery. Writers, artists, illustrators, a lot of them have incorporated that.”-Tim Burton

“I used to have a phone machine that you turn ‘on’ and ‘off,’ which was great. Now, it’s so technological that it’s like going down the rabbit hole.”-Tim Burton

“People told me I couldn’t kill Nicholson, so I cast him in two roles and killed him off twice.”-Tim Burton

“I don’t know what it was, maybe the movie theaters in my immediate surrounding neighborhood in Burbank, but I never saw what would be considered A movies.”-Tim Burton

“My parents suffered from that ideal of a perfect nuclear family. They found that a difficult pressure, I think.”-Tim Burton

“People say I am stuck in childhood, but it’s not that. I remember seeing a Matisse retrospective, and you could see he started out one way, and then he tried something different, and then he seemed to spend his whole life trying to get back to the first thing.”-Tim Burton

“I have a problem when people say something’s real or not real, or normal or abnormal. The meaning of those words for me is very personal and subjective. I’ve always been confused and never had a clearcut understanding of the meaning of those kinds of words.”-Tim Burton

“I think of Ray Harryhausen’s work – I knew his name before I knew any actor or director’s names. His films had an impact on me very early on, probably even more than Disney. I think that’s what made me interested in animation: His work.”-Tim Burton

“When it comes to art and science, people don’t like a lot of either. Instead of being open to it, they’re closed off about it.”-Tim Burton

“I don’t look at my films or my old drawings much, so that was an interesting way to kind of reconnect with myself a bit.”-Tim Burton

“I’ve often been accused of, ‘Oh the movies looked good but there’s no story,’ but I disagree with that in theory, and ‘9’ is a perfect example for me because they feel, the texture, and the look of that world, and those characters, is the story. That’s a major component of why you feel the way you do when you’re watching it.”-Tim Burton

“I keep thinking I’m going to miss it back in Los Angeles. But I don’t. The only thing I miss is driving out in the desert in the Southwest.”-Tim Burton

“Danny Elfman, the composer, tells me the only time he thinks I’m happy is when I’m on the scoring stage, and I see the pressure’s on him and it’s a little off me.”-Tim Burton