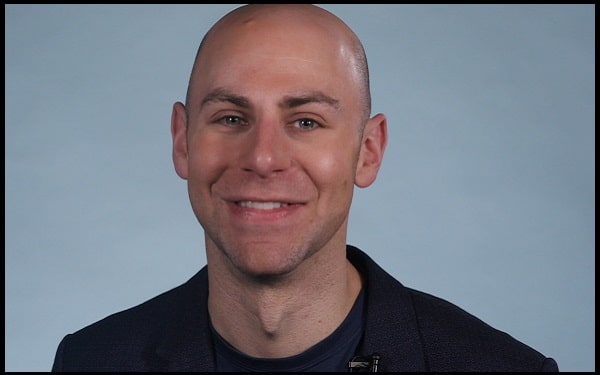 “Successful givers secure their oxygen masks before coming to the assistance of others. Although their motives may be less purely altruistic, their actions prove more altruistic, because they give more.”-Adam Grant 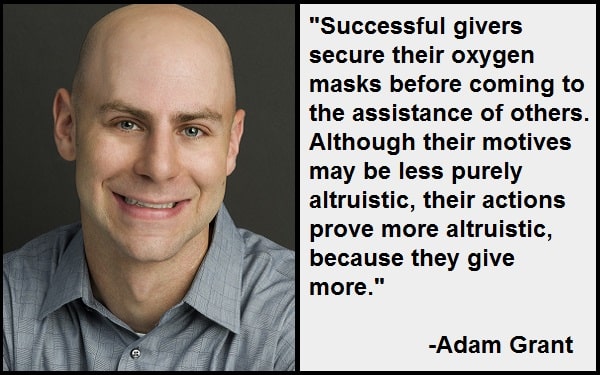 “If we want girls to receive positive reinforcement for early acts of leadership, let’s discourage bossy behavior along with banning bossy labels. That means teaching girls to engage in behaviors that earn admiration before they assert their authority.”-Adam Grant

“When I think about voting, I can skip it and still see myself as a good citizen. But when I think about being a voter, now the choice reflects on my character. It casts a shadow.”-Adam Grant

“The opposite of an underminer is a supporter. When colleagues are supportive, they go out of their way to be givers rather than takers, working to enhance our productivity, make us look good, share ideas, and provide the timely help.”-Adam Grant

“Takers believe in a zero-sum world, and they end up creating one where bosses, colleagues, and clients don’t trust them. Givers build deeper and broader relationships – people are rooting for them instead of gunning for them.”-Adam Grant

“Some people are selfish in all of their relationships. Those people are called sociopaths.”-Adam Grant

“Takers are self-serving in their interactions. It’s all about what can you do for me.”-Adam Grant

“The most promising ideas begin from novelty and then add familiarity.”-Adam Grant

“Agreeable people are warm and friendly. They’re nice; they’re polite. You find a lot of them in Canada.”-Adam Grant

“Power frees us from the chains of conformity.”-Adam Grant

“I believe that the most meaningful way to succeed is to help other people succeed.”-Adam Grant

“No one wants to hear everything that’s in your head. They just want you to live up to what comes out of your mouth.”-Adam Grant

“Originals are nonconformists, people who not only have new ideas but take action to champion them. They are people who stand out and speak up. Originals drive creativity and change in the world. They’re the people you want to bet on.”-Adam Grant

“To generate creative ideas, it’s important to start from an unusual place. But to explain those ideas, they have to be connected to something familiar.”-Adam Grant

“We all have thoughts and feelings that we believe are fundamental to our lives but that is better left unspoken.”-Adam Grant

“Creativity may be hard to nurture, but it’s easy to thwart.”-Adam Grant

“To get important work done, most leaders organize people into teams. They believe that when people collaborate toward a common goal, great things can happen. Yet in reality, the whole is often much less than the sum of the parts.”-Adam Grant

“It’s ironic that when you go through a tragedy, you appreciate more. You realize how fragile life is and that there are so many things to still be thankful for.”-Adam Grant

“Saying no frees you up to say yes when it matters most.”-Adam Grant

“You want people who choose to follow because they genuinely believe in ideas, not because they’re afraid to be punished if they don’t. For startups, there’s so much pivoting that’s required that if you have a bunch of sheep, you’re in bad shape.”-Adam Grant

“Procrastinating is a vice when it comes to productivity, but it can be a virtue for creativity.”-Adam Grant

“The great thing about a culture of givers is that’s not a delusion – it’s reality.”-Adam Grant

“As more women ‘lean in’ and we collectively continue to fight sexism, there’s another barrier to progress that hasn’t been addressed: Many men who would like to see more women leaders are afraid to speak up about it.”-Adam Grant

“In the conversation about women in leadership, male voices are noticeably absent.”-Adam Grant

“As a man, it is true that I will never know what it is like to be a woman. As an organizational psychologist, though, I feel a responsibility to bring evidence to bear on dynamics of work-life that affect all of us, not only half of us.”-Adam Grant

“For women to achieve equal representation in leadership roles, it’s important that they have the backing of men as well as women.”-Adam Grant

“Instead of assuming that emotional intelligence is always useful, we need to think more carefully about where and when it matters.”-Adam Grant

“If we want people to vote, we need to make it a larger part of their self-image.”-Adam Grant

“The more important argument against grade curves is that they create an atmosphere that’s toxic by pitting students against one another. At best, it creates a hypercompetitive culture, and at worst, it sends students the message that the world is a zero-sum game: Your success means my failure.”-Adam Grant

“In college, my idea of a productive day was to start writing at 7 A.M. and not leave my chair until dinnertime.”-Adam Grant

“I spend a lot of my time trying to help leaders build cultures of productive givers.”-Adam Grant

“I have two rules for a great book: make me think and make me smile.”-Adam Grant

“I’m not a fan of being inauthentic.”-Adam Grant

“Authenticity is a virtue. But just as you can have too little authenticity, you can also have too much.”-Adam Grant

“Frenemies are worse than enemies, and it’s not just in the workplace.”-Adam Grant

“Teams need the opportunity to learn about each other’s capabilities and develop productive routines. So once we get the right people on the bus, let’s make sure they spend some time driving together.”-Adam Grant”

“Tweeting has taught me the discipline to say more with fewer words.”-Adam Grant

“I love discovering compelling new ideas and doing what I can to help spread the word about them.”-Adam Grant

“I start a lot of things and purposely leave them unfinished. When I have a bunch of really long emails, and I need time to think about the response, I’ll actually start replying, leave them as drafts, and move onto something else mid-sentence.”-Adam Grant

“When young women get called bossy, it’s often because they’re trying to exercise power without status. It’s not a problem that they’re being dominant; the backlash arises because they’re overstepping their status.”-Adam Grant

“Productive givers focus on acting in the long-term best interests of others, even if it’s not pleasant. They have the courage to give the critical feedback we prefer not to hear, but truly need to hear. They offer tough love, knowing that we might like them less, but we’ll come to trust and respect them more.”-Adam Grant

“It’s true that every leader needs followers. We can’t all be nonconformists at every moment, but conformity is dangerous – especially for an entity in formation.”-Adam Grant

“When people are depending on us, we end up finding strength we didn’t know we had.”-Adam Grant

“If you don’t hire originals, you run the risk of people disagreeing but not voicing their dissent.”-Adam Grant

“A resilient culture has a certain amount of resistance embedded in it. Not so much to capsize it, but enough so that it doesn’t atrophy.”-Adam Grant

“I want my children to know that we often become resilient for others.”-Adam Grant

“Kids who evolve into creative adults tend to have a strong moral compass.”-Adam Grant

“I try to get as close as I can to cleaning out my inbox every night.”-Adam Grant

“Geniuses don’t have better ideas than the rest of us. They just have more of them.”-Adam Grant

“Recognize that dissenting opinions are useful even when they’re wrong, and go out of your way to reward them.”-Adam Grant

“People often believe that character causes action, but when it comes to producing moral children, we need to remember that action also shapes character.”-Adam Grant