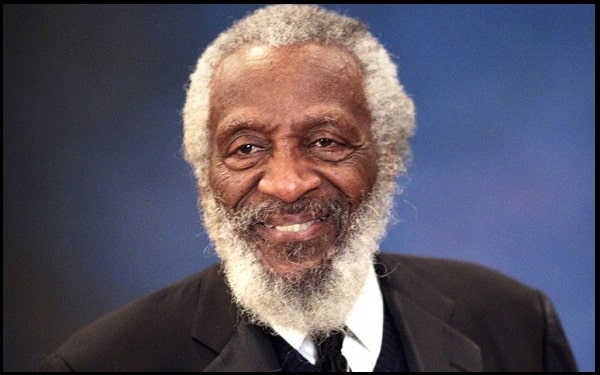 “Political promises are much like marriage vows. They are made at the beginning of the relationship between candidate and voter, but are quickly forgotten.”-Dick Gregory 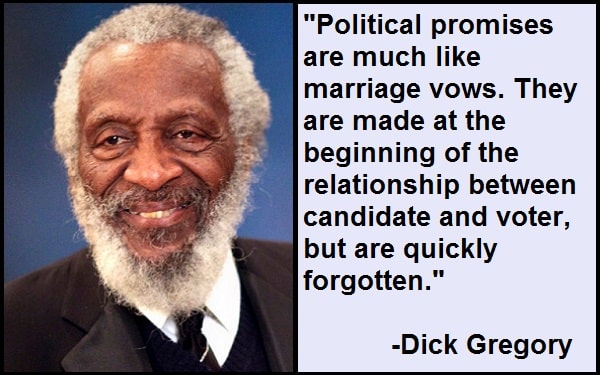 “Do you know why Madison Avenue advertising has never done well in Harlem? We’re the only ones who know what it means to be Brand X.”-Dick Gregory

“I never learned hate at home or in shame. I had to go to school for that.”-Dick Gregory

“When you have a good mother and no father, God kind of sits in. It’s not enough, but it helps.”-Dick Gregory

“In America, with all of its evils and faults, you can still reach through the forest and see the sun. But we don’t know yet whether that sun is rising or setting for our country.”-Dick Gregory

“I never believed in Santa Claus because I knew no white dude would come into my neighborhood after dark.”-Dick Gregory

“I wouldn’t mind paying taxes – if I knew they were going to a friendly country.”-Dick Gregory

“Riches do not delight us so much with their possession, as torment us with their loss.”-Dick Gregory

“When I lost my rifle, the Army charged me 85 dollars. That is why in the Navy the Captain goes down with the ship.”-Dick Gregory

“If they took all the drugs, nicotine, alcohol and caffeine off the market for six days, they’d have to bring out the tanks to control you.”-Dick Gregory

“I am really enjoying the new Martin Luther King Jr stamp – just think about all those white bigots, licking the backside of a black man.”-Dick Gregory

“And we love to dance, especially that new one called the Civil War Twist. The Northern part of you stands still while the Southern part tries to secede.”-Dick Gregory

“I tell people, ‘If you want to send a message to the White House, call my house.'”-Dick Gregory

“There is a limit on how much information you can keep bottled up.”-Dick Gregory

“My mother was the sweetest lady who ever lived on this planet, but if you tried to tell her that Jesus wasn’t a Christian, she would stomp you to death.”-Dick Gregory

“I used to get letters saying, ‘I didn’t know black children and white children were the same.'”-Dick Gregory

“It was an unwritten law that black comics were not permitted to work white nightclubs. You could sing and you could dance, but you couldn’t stand flat-footed and talk; that was a no-no.”-Dick Gregory

“You know, I always say white is not a color, white is an attitude, and if you haven’t got trillions of dollars in the bank that you don’t need, you can’t be white.”-Dick Gregory

“Love is very dangerous if you just have love and don’t have the ability to be lovable.”-Dick Gregory

“Let me tell you, never before in the history of this planet has anybody made the progress that African-Americans have made in a 30-year period, in spite of many black folks and white folks lying to one another.”-Dick Gregory

“Every holiday on the calendar, I check in a hotel and fast – I don’t eat, I don’t drink, I don’t talk.”-Dick Gregory

“If you take 12 glasses of water from the coconut – not the ones you buy in the store, although that’s good – the fresh coconuts, the little brown ones with the three eyes, if you take 12 of those within 24 hours, your blood will go back to the way it was when you were born.”-Dick Gregory

“Coconut milk is the only thing on this planet that comes identically to mother’s milk.”-Dick Gregory

“I waited at the counter of a white restaurant for eleven years. When they finally integrated, they didn’t have what I wanted.”-Dick Gregory

“To me, seeing a really great comedian is a bit like watching a musician or a poet.”-Dick Gregory

“Once I realized the value of making people laugh, I got very good at it. Fast.”-Dick Gregory

“My belief is, you know, certain things have to be explained that’s never been explained.”-Dick Gregory

“I never thought I’d see the day that I would see white folks as frightened, or more so than black folks were during the civil rights movement when we were in Mississippi.”-Dick Gregory

“Now here’s what I’m saying: I’ve always believed that every other month we hear about compromisation of bank records, I think that’s the CIA and the FBI. Now let me tell you why I’m saying this. I don’t believe no insignificant pip-squeak is going to be able to pull this off month after month and we can’t find out what’s going on.”-Dick Gregory

“There’s a God force inside of you that gives you a will to live.”-Dick Gregory

“Everything we do we should look at in terms of millions of people who can’t afford it.”-Dick Gregory

“People with high blood pressure, diabetes – those are conditions brought about by lifestyle. If you change the life style, those conditions will leave.”-Dick Gregory

“I buy about $1,500 worth of papers every month. Not that I trust them. I’m looking for the crack in the fabric.”-Dick Gregory

“Being white is a job in America. You take that away, you better get the soldiers out.”-Dick Gregory