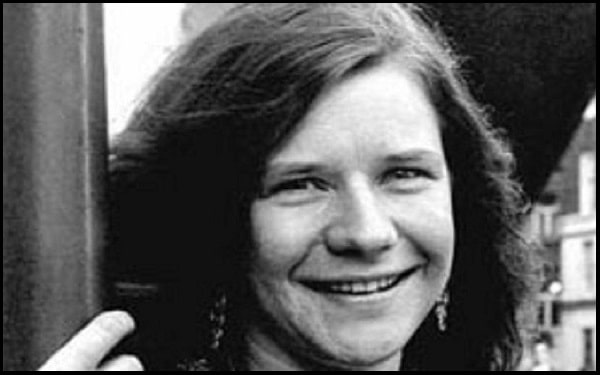 Janis Joplin Quotes:- Janis Joplin (January 19, 1943 – October 4, 1970) was an American singer-songwriter who sang rock, soul, and blues music. One of the most successful and widely known rock stars of her era, she was known for her powerful mezzo-soprano vocals and “electric” stage presence.

“I’ve been looking around, and I noticed something: how much you really need to be loved. Ambition isn’t just a desperate quest for positions or money. It’s just love – lots of love.”-Janis Joplin 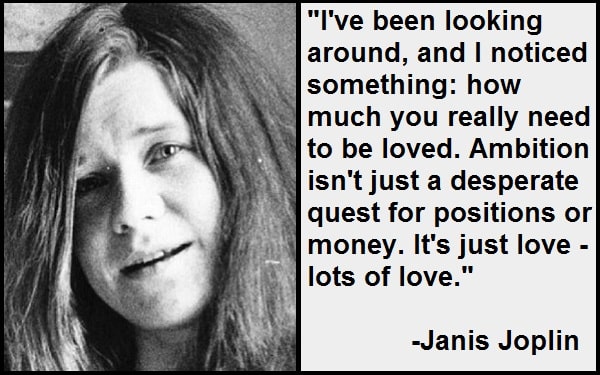 “When I sing, I feel like when you’re first in love. It’s more than sex. It’s that point two people can get to they call love when you really touch someone for the first time, but it’s gigantic, multiplied by the whole audience. I feel chills.”-Janis Joplin

“I can’t talk about my singing. I’m inside it. How can you describe something you’re inside of?”-Janis Joplin

“On stage, I make love to twenty-five thousand people, and then I go home alone.”-Janis Joplin

“Don’t compromise yourself. You are all you’ve got.”-Janis Joplin

“I got treated very badly in Texas. They don’t treat beatniks too well in Texas. Port Arthur people thought I was a beatnik, though they’d never seen one and neither had I.”-Janis Joplin

“Billie Holiday, Aretha Franklin. Now, they are so subtle, they can milk you with two notes. They can make you feel like they told you the whole universe. But I don’t know that yet. All I got now is strength. Maybe if I keep singing, maybe I’ll get it.”-Janis Joplin

Great Quotes By Janis Joplin That Will Inspire you

“My father wouldn’t get us a TV, he wouldn’t allow a TV in the house.”-Janis Joplin

“Oh Lord, won’t you buy me a Mercedes Benz.”-Janis Joplin

“Texas is OK if you want to settle down and do your own thing quietly, but it’s not for outrageous people, and I was always outrageous.”-Janis Joplin

“Do you know why we’re stuck with the myth that only black people have a soul? Because white people don’t let themselves feel things.”-Janis Joplin

“Audiences like their blues singers to be miserable.”-Janis Joplin

“I’m one of those regular weird people.”-Janis Joplin

“You got to get it while you can.”-Janis Joplin

“As it gets closer and more probable, being a star is really losing its meaning.”-Janis Joplin

“Being an intellectual creates a lot of questions and no answers.”-Janis Joplin

“Guess what, I might be the first hippie pinup girl.”-Janis Joplin

“Who you are is what you settle for, you know?”-Janis Joplin

“I’m a victim of my own insides. There was a time when I wanted to know everything. It used to make me very unhappy, all that feeling. I just didn’t know what to do with it. But now I’ve learned to make that feeling work for me.”-Janis Joplin

“All of a sudden, someone threw me in front of this rock and roll band. And I decided then and there that was it. I never wanted to do anything else.”-Janis Joplin