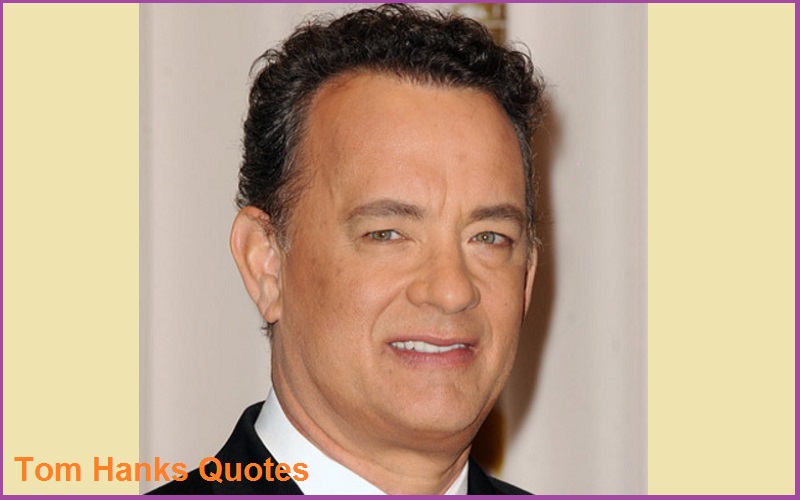 “Everybody has something that chews them up and, for me, that thing was always loneliness. The cinema has the power to make you not feel lonely, even when you are.”-Tom Hanks 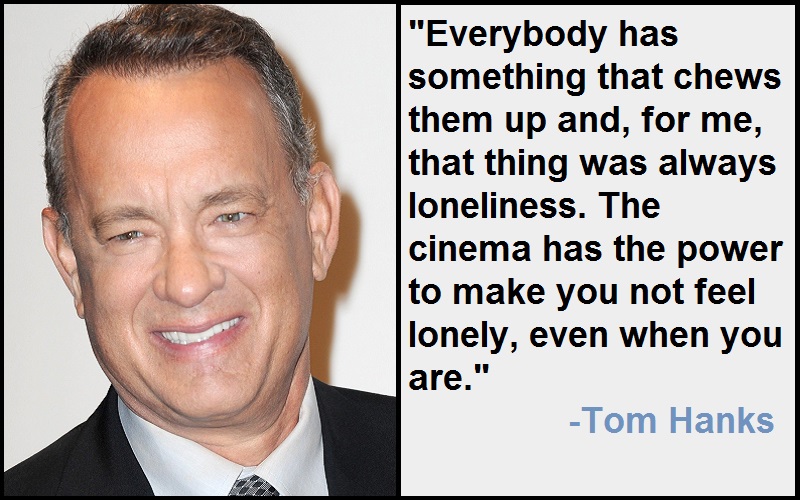 “There’s a difference between solitude and loneliness. I can understand the concept of being a monk for a while.”-Tom Hanks

“You cannot look up at the night sky on the Planet Earth and not wonder what it’s like to be up there amongst the stars. And I always look up at the moon and see it as the single most romantic place within the cosmos.”-Tom Hanks

“I do not want to admit to the world that I can be a bad person. It is just that I don’t want anyone to have false expectations. Moviemaking is a harsh, volatile business, and unless you can be ruthless, too, there’s a good chance that you are going to disappear off the scene pretty quickly.”-Tom Hanks

“If you’re funny, if there’s something that makes you laugh, then every day’s going to be okay.”-Tom Hanks

“I think it’s better to feel good than to look good.”-Tom Hanks

“A hero is somebody who voluntarily walks into the unknown.”-Tom Hanks

“There’s this misconception that the Navy is this cruise ship, and you get to go out and sail around, and every now and then, you have to swab the deck. But, no, it is a very impressive group of young people that live at sea, in this place that’s very uncomfortable. They exude a pride that is well-deserved.”-Tom Hanks

“What we’re doing with Band of Brothers is trying to put it into human terms, so it is not just a flickering, black and white myth on a screen, it is a resonant story. I want the audience to recognize themselves in these men. They’re not just mythic heroes.”-Tom Hanks

Growing up in northern California has had a big influence on my love and respect for the outdoors. When I lived in Oakland, we would think nothing of driving to Half Moon Bay and Santa Cruz one day and then driving to the foothills of the Sierras the next day.”-Tom Hanks

“Some people go to bed at night thinking, ‘That was a good day.’ I am one of those who worries and asks, ‘How did I screw up today?”-Tom Hanks

“If I was to direct Ron Howard, I guarantee you, I would put him through a living hell every day. I would demand so much of him. We wouldn’t quit until he leaves the set crying. Weeping! Spent!”-Tom Hanks

“And I’m not apolitical – I’m very specific in my politics. But a lot of the time it’s nobody’s business unless you’re over at my house having dinner.”-Tom Hanks

“When I was growing up, everybody in charge, my parents and teachers, had all survived the war, and they talked about the war like it was the Kraken – you know, this huge beast that roamed the earth during their formative years.”-Tom Hanks

“I have high blood sugars, and Type 2 diabetes is not going to kill me. But I just have to eat right, and exercise, and lose weight, and watch what I eat, and I will be fine for the rest of my life.”-Tom Hanks

“Prior to Saving Private Ryan I never worked with men. I was always working with some babe, and it was always about falling in love, and it just got turned around. I’m not looking for any particular kind of story. I wait until it comes across my desk.”-Tom Hanks

“It’s always a combination of physics and poetry that I find inspiring. It’s hard to wrap your head around things like the Hubble scope.”-Tom Hanks

“Actors with political views are a dime a dozen.”-Tom Hanks

“My job has always been to hold a mirror up to nature.”-Tom Hanks

“Movie-making is telling a story with the best technology at your disposal.”-Tom Hanks

“My favorite traditional Christmas movie that I like to watch is All Quiet on the Western Front. It’s just not December without that movie in my house.”-Tom Hanks